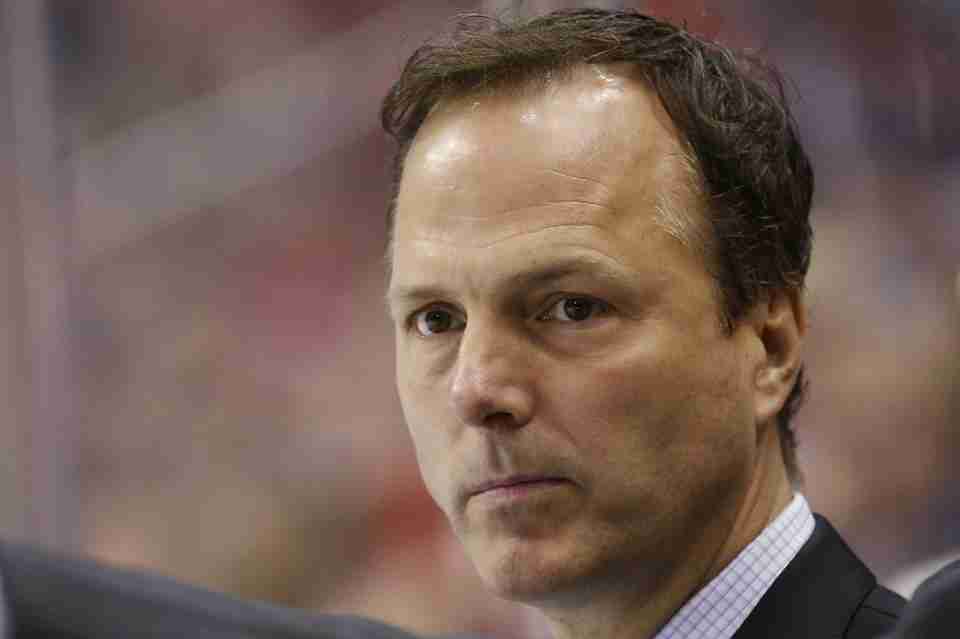 TAMPA, Fla. (AP) _ The tale of Jon Cooper’s journey to the Stanley Cup Final is almost too good to be true.

A former criminal defense attorney who played lacrosse in college and gave up practicing law to pursue a career in hockey, the coach of the Tampa Bay Lightning didn’t take a traditional path to landing a job in the NHL and guiding his team within three victories of the sport’s most coveted trophy.

Cooper is an exceptional communicator who began working with most of Tampa Bay’s younger players, including the “Triplets” line of Tyler Johnson, Ondrej Palat and Nikita Kucherov, in the minor leagues. His calm demeanor and knack for winning have made him a hit with veterans, too.

“When I got into coaching, I think I brought the life philosophy. … I was probably more of a life coach when I started out than a tactical coach,” Cooper said. “I had to learn more tactically and systematic coaching as I kind of went up in my career, and the more serious I got about it.”

A native of Prince George, British Columbia, who grew up shooting pucks into a clothes dryer in the basement of the family home, Cooper played for his high school team before heading off to Hofstra University, where he played one year of club hockey and was a four-year standout in lacrosse.

He later graduated from the Thomas M. Cooley Law School in Lansing, Michigan, where he launched a career as a successful lawyer only to realize he had a greater passion for hockey.

His venture into coaching began with a stint with a struggling high school program he transformed into a playoff team. He eventually gave up his law practice in 2003, embarking on a ride that saw him win American junior hockey championships with the USHL’s Green Bay Gamblers, NAHL’s St. Louis Bandits and NA3HL’s Metro Jets.

Lightning general manager Steve Yzerman brought him to replace Guy Boucher in March 2013, setting the stage for an impressive turnaround.

Tampa Bay went from finishing with the second-worst record in the Eastern Conference to the third-best in Cooper’s first full season. A year later, the team is in the Stanley Cup Final against the Chicago Blackhawks, who are aiming for a third NHL title in six years.

Joel Quenneville, who led Chicago to Stanley Cup championships in 2010 and 2013, is one of the coaches Cooper followed when he rising through the ranks.

Quenneville appeared in 803 games during a 13-year NHL playing career. He’s won 754 regular-season games as a coach _ third-most all-time _ in 18 seasons with the St. Louis Blues, Colorado Avalanche and the Blackhawks.

The coach said even before getting to the NHL, he sought out Quenneville and Mike Babcock, among others to try to learn as much as could.

“Still today, I converse with them about different things. Obviously, not the same way we used to speak. But as I got going, those were guys at the time I looked up to,” Cooper said.

As for his coaching style?

“I don’t know. I’m a hockey coach,” Cooper said. “A lot of people ask me what I do, and lot of times I say I’m a people manager. That’s kind of what I do. And a lot of my philosophy is I manage people.”

Players appreciate his ability to relate to everyone from rookies to accomplished veterans.

“He’s very respectful and he cares a lot about his players,” left wing Brenden Morrow, who’s in his first season with the Lightning after spending 15 with the Dallas Stars, Pittsburgh Penguins and St. Louis Blues.

“He’s got some swagger and belief in what he’s doing. All that stuff, I think, trickles down, but I don’t know if it’s completely different,” Morrow added. “I’ve had a players’ coach in Dave Tippett, too, where you’d go through a wall for him. The messages and the speeches may be a little bit different in how they communicate and handle players individually, but the way their players want to compete for them are probably the same.”

Johnson scored his NHL-leading 13th goal of the playoffs, helping the Lightning even the best-of-seven Cup Final on Saturday night. Game 3 is Monday night in Chicago.

The “Triplets” have scored more than half Tampa Bay’s goals this postseason. Johnson, 24, was a first-time All-Star this season, his second in the NHL.

“I can’t say enough good things about Coop. … Coming into the AHL, you’re really going from playing as a kid to playing with adults. You kind of have to learn, not only on the ice but off the ice,” Johnson said. “He’s always been there to help us out. He’s one of those guys you can always talk to, regardless what it is. He’s a mentor. I don’t know where I’d be without him.”

Next post Ex-Illinois soccer player joins those suing over concussions