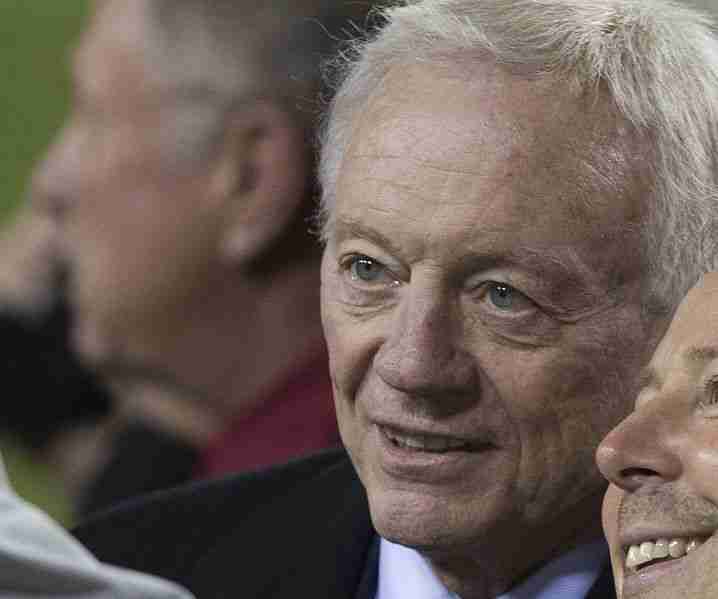 HOUSTON (AP) – Jerry Jones will now have a plaque in Canton to go with the three Super Bowl trophies he has as owner of the Dallas Cowboys, and his $1.2 billion showcase that set a new standard for NFL stadiums.

The 74-year-old Jones, the Arkansas oilman who purchased the Cowboys for $140 million in 1989 and has turned them into a franchise worth more than $4 billion, was elected into the Pro Football Hall of Fame on Saturday as a contributor.

“I’ve had family around me in my love for football and my love for the people that are in sports,” Jones said. “This room is full of where I’ve wanted to spend my life.”

After presenting former Cowboys players Michael Irvin, Emmitt Smith and Larry Allen for their inductions to the Hall of Fame in the past 10 years, Jones will be among seven men in Canton for their own enshrinements in August.

Jones is still very much active in charting the league’s course in the 21st century. The stadium dubbed “Jerry World” opened in 2009 and raised the bar for stadiums that followed in New Jersey, the Bay Area, Minneapolis, Atlanta and, eventually, Los Angeles.

A constant presence in front of the cameras, Jones also brokered TV and marketing deals that have helped turn the league into a $13 billion-a-year business.

It was Jones who early on in his ownership bucked a longstanding NFL practice by cutting separate marketing deals for the Cowboys and Texas Stadium, their former home with a hole in the roof, instead of sticking to league-wide efforts.

Jones is the sixth person associated with the Cowboys of the 1990s, who won three Super Bowl titles in a four-year span, to be elected into the Hall of Fame. Troy Aikman, Deion Sanders, Irvin, Smith and Allen are the others.

Jones’ election into the Hall of Fame came on the same weekend that fans hoped that the Cowboys might also be in Houston for Super Bowl 51 with a chance to win another trophy – their sixth overall, fourth under Jones and first since the 1995 season.

“I’m not going to tell you whether I’d rather be sitting here or have that team out here on the field,” Jones said. “I can’t really tell you. I hope you know.”

The Cowboys, led by the rookie duo of quarterback Dak Prescott and Ezekiel Elliott, were the NFC’s top seed after 13 regular-season victories. But they lost to Green Bay in their first NFC divisional playoff game at AT&T Stadium, where a Super Bowl was played six years ago.

Jason Garrett of the Cowboys was honored Saturday as the AP NFL Coach of the Year.

Prescott earned the 2016 Associated Press NFL Offensive Rookie of the Year award. The quarterback drafted in the fourth round and the running back Dallas picked fourth overall were the only players to get any votes.

“So deserving,” Prescott said of Jones’ election. “He’s been outstanding to me, been great. I couldn’t ask for any better owner to start my career.”

Next post Tips to Overcome Personal Struggles and Achieve Goals