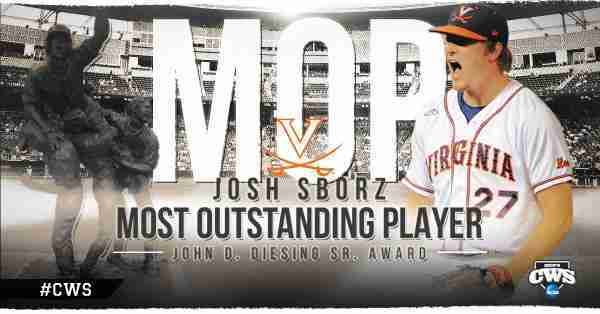 One day after Virginia won the CWS for the first time, beating Vanderbilt 4-2, the Cavaliers’ returned to a raucous greeting by an estimated 4,000 fans who cheered for an hour at John Paul Jones Arena.

The players, introduced individually after a highlight film of a most unusual season by Virginia standards was shown, threw T-shirts into the crowd as they walked onto a podium to more cheers.

Their road to the reception had been pocked with doubters for the past month as the Cavaliers, NCAA tournament regulars for 11 years, battled costly injuries and stumbled through the middle of the season.

Then, after rallying just to qualify for the Atlantic Coast Conference tournament, they lost three straight then and headed to a regional in Lake Elsinore, California as a No. 3 seed and got hot.

The ceremony was a celebration of the first ACC team to win the CWS since Wake Forest in 1955, and made Virginia (44-24) the champion with the fewest victories since Southern California had 43 in 1968.

But the loudest roars for players were reserved for the veterans.

There was Sborz, a junior who was 3-0 with a save in Omaha; junior Branden Waddell, who went seven innings on three days of rest in the clincher; junior Nathan Kirby, who earned the first save of his career while pitching for just the second time in nine weeks because of injury; and senior Kenny Towns, who saved a run on defense, drove one in and walked out last with the trophy held high above his head.

Winning it all, Waddell said beforehand, was something the team never doubted it could realize.

“We never really changed our own expectations,” Waddell said. “We knew the stuff we had in the clubhouse was good enough to go all the way. It wasn’t always pretty. We did face our ups and downs but we always had faith and confidence that if put it all together, we could go all the way.”

O’Connor described the season as “ever-evolving,” change forced by hip surgery that shelved infielder John La Prise for the season, back surgery that forced former No. 3 hitter Joe McCarthy to miss half of it, and a muscle strain that put staff ace Kirby on the shelf for most of the last two months.

After being expected to get to Omaha in years past, these Cavaliers were not.

“When I think of this team, I’ll think of many, many things,” said O’Connor, who has led the once-woeful Cavaliers to the NCAA tournament in each of his 12 season. “Probably the biggest thing I’ll think about is humility. This baseball program was humbled this year and through humility learned a lot. The players learned a lot, the coaches learned a lot and this program rose to a level it’s never been before.”

It still took workhorse efforts by Sborz and Waddell, and five shutout innings from surprise Game 2 starter Haseley, to make it so. Haseley, the regular centerfielder, hadn’t pitched in a nearly a month.

Sborz worked the final four innings in Game 2, his pitch count climbing to near 80, and his example of emptying his tank to save everyone else for Game 3 was matched by Waddell in the final game.

“At that point, there’s nothing you’re holding back so you’re going to give it everything you’ve got and you kind of test your limits a little bit,” Waddell said. “You see how far you can go.”

He lasted 104 pitches, leaving after retiring the last 11 batters he faced.

The rest was up to Kirby, who had two very poor appearances in the CWS in his past, including a start five days earlier that lasted just 2 2-3 innings. But if he had any demons lurking, it didn’t show.

He struck out the side against the top of Vanderbilt’s lineup in the eighth, then fanned two more in the ninth, including pinch-hitter Kyle Smith, to end it as the Cavaliers dog-piled near second base.

It was, O’Connor said, “the biggest day in this program’s history.”