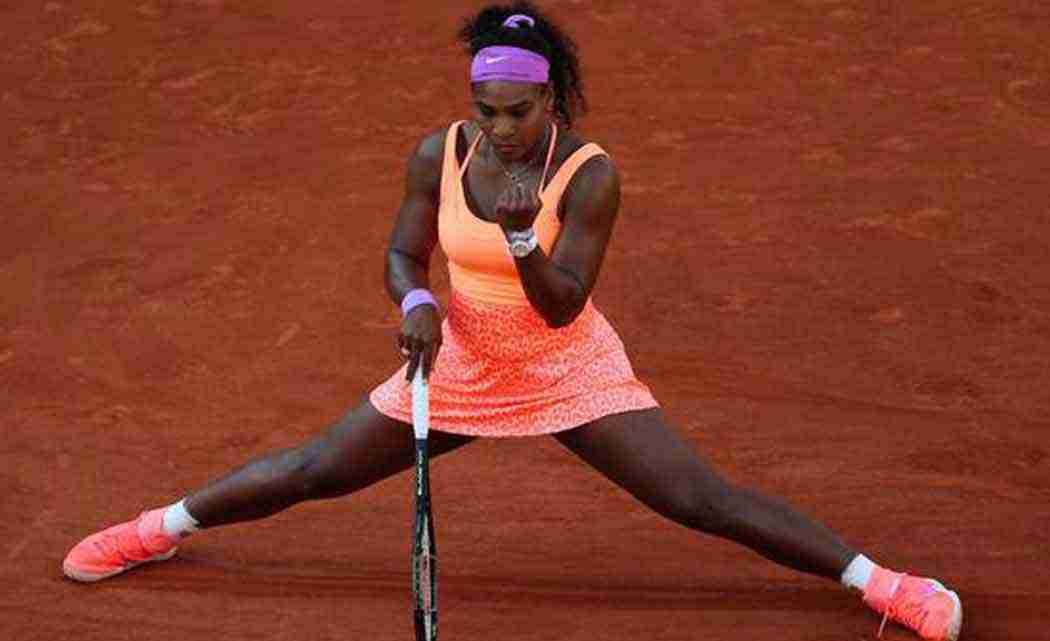 What started out as a stroll became quite a struggle for Serena Williams.

After going up by a set and two breaks in the French Open final Saturday, she double-faulted away that lead. Then, suddenly, she trailed in the third set.

As the tension thickened, Williams was warned by the chair umpire for cursing loudly. She even felt the need to hit one shot left-handed.

But when Williams plays her best, no one is better. Putting aside a lingering illness, a mid-match lull and a feisty opponent, Williams won her third title at Roland Garros and 20th Grand Slam singles trophy by beating 13th-seeded Lucie Safarova of the Czech Republic, 6-3, 6-7 (2), 6-2.

“I got so frustrated. I was just so angry at myself. I pretty much gave the match away,” the No. 1-seeded Williams said, her voice scratchy and her nose stuffy. “I just had to, like, try to pull it together.”

That she did, taking the last six games and adding to her 2002 and 2013 championships on the French Open’s red clay. Those go alongside six each from the U.S. Open and Australian Open, and five from Wimbledon.

“When I was a little girl, in California, my father and my mother wanted me to play tennis,” the 33-year-old American told the crown in French earlier. “And now I’m here, with 20 Grand Slam titles.”

Only two players in the century-plus history of Grand Slam tennis have more: Margaret Court with 24, and Steffi Graf with 22.

Williams also stretched her winning streak at the majors to 21 matches, following titles at the U.S. Open last September and Australian Open in January. She is the first woman since Jennifer Capriati in 2001 to win the Australian Open and French Open back-to-back and heads to Wimbledon’s grass with a chance to extend a bid to accomplish just about the only thing she hasn’t: win a calendar-year Grand Slam.

“Why not?” said her coach, Patrick Mouratoglou. “That’s probably the most difficult thing to do in tennis. But it’s possible.”

Saturday’s victory did not come easily for Williams, who skipped practice Friday because she was sick, sleeping until the afternoon at her Paris apartment.

“It’s been a nightmare,” Williams said.

Owner of the most feared serve in women’s tennis, she double-faulted 11 times.

She made 25 unforced errors in the second set alone, and 42 in all, 25 more than Safarova, a 28-year-old lefty with a whip-like forehand appearing in her first major final.

Williams got broken serving for the match at 6-5 in the second set, then was down 2-0 in the third, before turning things around.

“When she was on, she was just serving amazing and going for the returns, pressuring me right away,” said Safarova, who will play in the women’s doubles final Sunday with American Bethanie Mattek-Sands. “It’s just hard to do anything with that.”

When it was over, Williams dropped her racket, threw her head back and lifted her arms into a V.” In the stands, Mouratoglou held aloft two fingers on his right hand and made a fist with his left, to symbolize “20.”

And to think: Four times in this tournament, Williams dropped the opening set before coming back to win, including in Thursday’s semifinals, when she was lethargic and bothered by the flu.

So the question leading into the final was: How healthy would Williams be? She began providing answers from the get-go.

Williams closed the first game with a 120 mph ace. She went up 3-1 by breaking with a cross-court forehand return winner. The first set flew by, and even Safarova acknowledged afterward, “It was looking like it will be an easy match.”

At 4-1 for Williams in the second, seemingly all but over, she began to falter. The dull contest, and the Court Philippe Chatrier crowd, came to life.

When Safarova, growing ever more confident, held moments later, she had taken four consecutive games. She stood strong in the tiebreaker and at the outset of the third set, too, displaying the strokes that beat past champions Maria Sharapova and Ana Ivanovic during what Safarova called an “amazing two weeks for me.”

As soon as Safarova made things interesting enough Saturday to perhaps begin thinking about clutching the silver trophy, Williams quickly regained control, as she so often does.