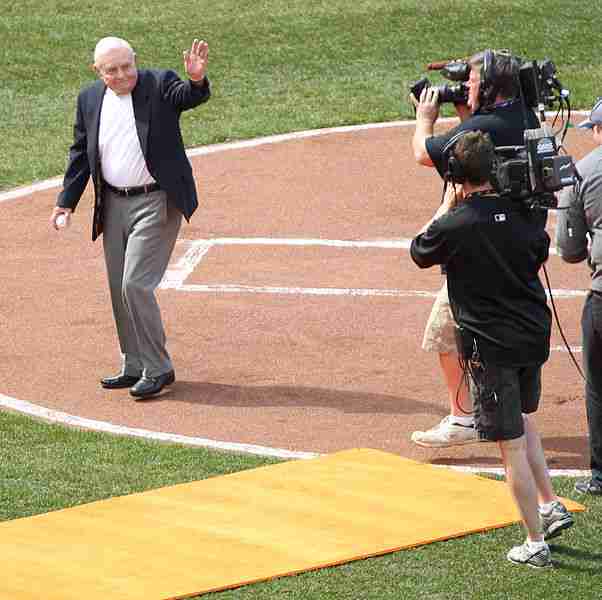 It was 1980, and Kurkjian – whose decades-long career in sports journalism has included time at The Baltimore Sun, Sports Illustrated and now ESPN – was just starting as the No. 2 baseball writer for The Washington Star.

His colleague, Dan Shaughnessy, the now-renowned Boston Globe columnist, made the introduction.

“Dan said, `Earl, this is Tim Kurkjian, he’s going to be backing me up. He’s going to be around the park a lot,”’ said Kurkjian, speaking recently at a talk hosted by the University of Maryland’s Shirley Povich Center for Sports Journalism. “Earl looked at me, said, `F— you, Tim,’ and walked away.”

“I almost started to cry,” Kurkjian recalled. “But Dan looks at me, and he goes, `Don’t worry. That means he likes you.”’

In the years to come (particularly during his time with The Sun), Kurkjian would become a close confidant to the celebrated, though often unpredictable, manager. He’d sit with Weaver for an hour at a time in the dugout before games, talking tactics and picking his brain about nuances of the sport.

But covering baseball has changed: Kurkjian said he’d never be able to get that kind of access today.

“Now, when you go see the Nationals or the Orioles, they parade Dusty Baker and Buck Showalter into this antiseptic interview room where everyone’s allowed in,” Kurkjian explained. “And they speak to 50 guys at a time as opposed to one person.”

Kurkjian believes the rise of digital media, as well as teams’ stricter regulations for press, have cost journalists opportunities to get to know their subjects on a more personal level. That can affect the quality of the content fans read.

“You’re just not going to learn the game sitting in that room compared to sitting with Earl Weaver on the bench,” he said. “I can’t tell you how much I miss going to a ballpark and getting 20 minutes alone with the manager.”

Kurkjian, who has moved from beat reporting to more in-depth print and television journalism as his career has progressed, added that lack of access particularly hurts the kind of work he does now. For features and columns to be compelling, he explained, getting the details is key.

Access to players and managers was just one of many topics touched on at the talk, which also featured Chelsea Janes, Nationals beat writer for The Washington Post. The event – which was moderated by former Post Sports editor George Solomon – offered a look at the changing landscape of baseball journalism, from adapting to the 24-hour news cycle to the use of new computer-based statistics measurements.

One major topic was the changing types of stories editors are pushing.

Besides growing emphasis on more television and-multimedia-based reporting, there’s been a shift away from daily game recaps, Kurkjian and Janes said.

Both have concerns about that.

Janes said she thinks regular game reports are still of value to her readers.

“I was told this by (fellow Post baseball correspondent) Barry Svrluga, who has written a lot about the Nats: that it’s sort of like adding a chapter to a book,” she said. “Beyond score, beyond stats, there’s fitting each night into kind of a whole sequence of the season.”

As a young reporter – she’s been with the Post, her first full-time gig, only since 2013 – Janes was not a part of the pre-digital age of sports journalism.

But she, too, feels the challenges of access in the modern game. Because of team regulations, she said, often players are “fairly canned” with what they tell the media.

But she said one way around this was to seek out “go-to” personalities on a team. Unlike Kurkjian, whose years as a beat reporter were less hampered by the restrictions of today, allowing him to gain the trust of enigmatic stars like Cal Ripken, Janes operates in an environment where having outgoing athletes to rely on is key.

She said Nationals pitcher Max Scherzer and manager Baker, in particular, are reliable sources of colorful news, but said many of the younger players are more guarded around journalists.

“A lot of the young guys have been brought up in a way where they’re very filtered with the media,” she said, explaining that teams now regularly brief their players on how to speak to reporters.

Kurkjian added that he thought the influence of social media was further discouraging players from wanting to share too much with the press.

“They’re fearful that what I say is going to get twisted somehow by social media,” he said. “Ï can’t tell you how much this hurts me as a writer, that we’re losing more and more good talkers every year.”

Other hurdles the duo discussed were the unique challenges that women in the business face, as well as their take on how to best incorporate new methods of analysis into their reporting.

“Ï think it’s not quite as strange to be a woman in the locker room now, because there are so many of them,” said Janes, who played baseball growing up and lettered in softball at Yale. “And if you establish yourself, and that you know what you’re talking about, they will respect you.”

She added, “I think that’s a testament to what (women in the field) before me went through.”

With respect new data technologies, meanwhile, both seemed open – to a point.

Speaking about the recent analytics movement, in which experts and teams (including 2016 World Series champs Chicago Cubs) are turning towards new, advanced statistical methods to measure effectiveness of players, Janes said the tools can be useful. But, she said, they shouldn’t be a replacement for a more comprehensive approach to reporting.

For one thing, data can’t get inside a player’s head.

“It’s impossible to explain the mental strength it takes for these guys to be good for so long,” she said. “That component is impossible to quantify.”

Kurkjian, too, had mixed feelings about the growing dependency on computer analysis.

“I love the data,” he said. “But if we honestly think that all the answers are on our computer screen – if we take the human element out of the game – then we’re making a huge mistake.”

Next post Teachers open world to classrooms with virtual reality