Don Baylor, former MVP and manager of year, dead at 68 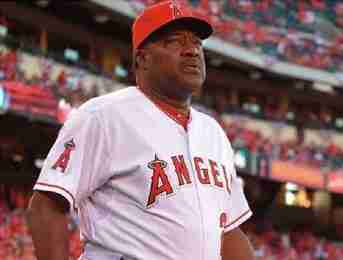 Don Baylor, the 1979 AL MVP with the California Angels who went on to become manager of the year with the Colorado Rockies in 1995, died Monday of cancer. He was 68.

Baylor died in his hometown of Austin, Texas, after a 14-year battle with multiple myeloma, his family said in a news release from the Angels.

“Don passed from this earth with the same fierce dignity with which he played the game and lived his life,” Baylor’s wife, Rebecca, said.

Baylor played in all 162 games in 1979 and led the majors with career bests of 139 RBIs and 120 runs. He also had career highs in homers (36) and hits (186) while helping the Angels to the American League West title before they lost to Baltimore in the AL championship series.

When the stocky Baylor retired, he had been hit by pitches a then-record 267 times, and led the majors in that category seven times. He also had 285 steals, most of them early in his career. That included a career-high 52 with Oakland in 1976.

He was the first manager of the expansion Rockies, leading them to their first playoff appearance in the franchise’s third season. Colorado lost to Atlanta in four games in an NL Division Series.

Baylor spent six years with Colorado and two-plus seasons as manager of the Chicago Cubs, from 2000-02. His career record was 627-689. He was most recently the hitting coach for the Angels and spent nearly 50 years in pro baseball.

“Throughout stints with 14 different major league teams as a player, coach or manager, Don’s reputation as a gentleman always preceded him,” Commissioner Rob Manfred said.

Baylor won a World Series with Minnesota in 1987, hitting one of his four postseason homers in the seven-game victory over the St. Louis Cardinals.

“Don’s commitment to the game and its future also inspired him to play an instrumental role in helping the MLBPA establish itself as a bona fide union,” players’

Born June 28, 1949, in Austin, Baylor was a second-round pick by Baltimore in 1967 and chose baseball over a chance to be the first black football player at Texas.

Baylor went to junior college before joining the Orioles organization, made his big league debut in 1970 and spent six years with Baltimore. After a year in the first of two stints with Oakland, Baylor played six seasons for the Angels.

Mostly a designated hitter but also an outfielder and first baseman, Baylor also had stops with the New York Yankees, Boston and the Twins before finishing his career with the A’s in 1988.