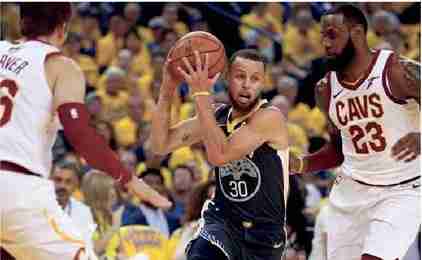 OAKLAND, Calif. – HeHHHhStephen Curry and coach Steve Kerr’s Golden State Warriors have repeatedly said they want to build something special for the long haul, to compete for championships year after year.

LeBron James considers his familiar NBA Finals opponent among the best teams ever.

Where the Warriors will put themselves in the dynasty debate if they win a third championship in four years. And if they continue to win titles and there domination doesn’t appear to be ending anytime soon there won’t be any debate “As a fan of the NBA, you could go down the list of the teams that won multiple years and just dominated the league for stretches of time,” Curry said.

The Warriors are trying to join Bill Russell’s Celtics, the Bulls led by Michael Jordan and the Lakers’ trio of title runs fueled by George Mikan in the 1950s, Magic Johnson and Kareem Abdul-Jabbar in the O’Neal and Kobe Bryant nearly 20 years ago as the only franchises in NBA history to capture three championships in four years.

The Warriors are halfway there, holding a 2-0 lead against the underdog Cavs as the series shifts to Cleveland for Game 3 on Wednesday.

“You look at it, they’ve got four Hall of Famers on their team in Klay, Dray, Steph and KD. They’ve got a Finals MVP that comes off their bench,” James said in reference to Iguodala. “… I don’t know where they will fall in my book, but they will have a nice chapter.” Not everybody is ready to crown the Warriors as a dynasty, not just yet anyway. Not even if they win the title this year.

“I don’t like to go dynasty stuff, they’ve been the team of the decade,” said Gary Payton, the longtime Seattle SuperSonics point guard who played 17 seasons through 2007. “That’s what it is. They’ve been doing their thing. When we get into a dynasty is Michael Jordan and them winning six, that’s a dynasty. The Golden State Warriors (would have) won three out of four, that’s great.

“It’s coming to be a dynasty. If you win a couple more, then you’re talking about a dynasty. So three of them is in the right stage and the right movement to becoming a dynasty, yes.” The defending champions are playing in a fourth straight finals chasing a repeat they couldn’t pull off in 2016 after capturing the franchise’s first title in 40 years during 2014-15 with Kerr as a rookie head coach.
TNT analyst and former player Charles Barkley wants nothing to do with dynasty talk regarding the Warriors.

“We don’t have any dynasties. It’s been a long time since we’ve had a dynasty,” Barkley said. “The Bulls won six, the Spurs won five. We’ve had a lot of really good teams.