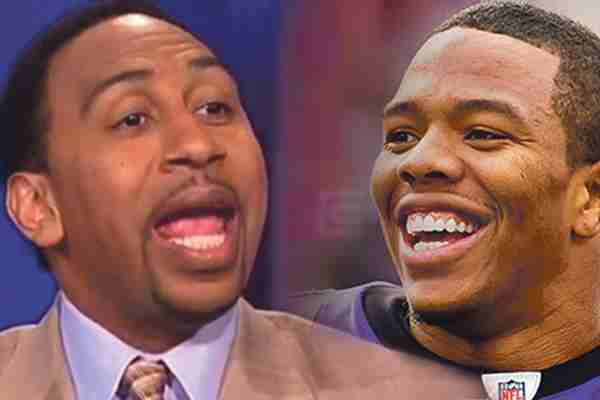 ESPN’s maverick commentator Stephen A. Smith is under fire for comments he made blaming women for putting themselves in harm’s way when they are abused.

Smith has apologized and the network has suspended him for a week.

His remarks came during a discussion on ESPN2’s First Take on Friday about the NFL’s two-game suspension of Baltimore Ravens running back Ray Rice following charges he assaulted his now wife. The remarks attracted widespread attention, including a stinging rebuke online from a fellow ESPN personality.

Rice, 27, was arrested for domestic violence following a Feb. 15 altercation in Atlantic City, N.J., in which he allegedly struck his then fiancée Janay Palmer. He has been accepted into a diversion program, which, upon completion, could lead to the charges being expunged.

Despite the court’s decision not to impose criminal punishment, NFL Commissioner Roger Godell “determined, as he advised Rice, that the conduct was incompatible with NFL policies and warranted disciplinary action,” an NFL statement said.

The NFL suspended Rice on July 24 without pay. He will miss the season opener against AFC North champion Cincinnati on Sept. 7 and the Sept. 11 game on Thursday night against the Pittsburgh Steelers.

Godell also fined the six-year veteran an additional game check “for conduct detrimental to the NFL in violation of the league’s Personal Conduct Policy.”

As a hot debate has erupted over perceived leniency by the NFL in a serious matter and Smith offered his take on the issue, saying, among other things, that while men “have no business putting your hands on a woman … let’s make sure we don’t do anything to provoke wrong actions, because … if we come after somebody [who] has put their hands on you, it doesn’t negate the fact that they already put their hands on you. So let’s try to make sure that we can do our part in making sure that that doesn’t happen.”

He added that “domestic violence or whatever the case may be, with men putting their hands on women, is obviously a very real, real issue in our society. And I think that just talking about what guys shouldn’t do, we got to also make sure that you can do your part to do whatever you can do to make, to try to make sure it doesn’t happen.

“We know they’re wrong. We know they’re criminals. We know they probably deserve to be in jail. In Ray Rice’s case, he probably deserves more than a 2-game suspension which we both acknowledged. But at the same time, we also have to make sure that we learn as much as we can about elements of provocation. Not that there’s real provocation, but the elements of provocation, you got to make sure that you address them, because we’ve got to do is do what we can to try to prevent the situation from happening in any way. And I don’t think that’s broached enough, is all I’m saying. No point of blame.”

Smith’s ESPN colleague Michelle Beadle quickly picked up on his comments, saying on Twitter that “I was just forced to watch this morning’s First Take. A) I’ll never feel clean again B) I’m not aware that I can provoke my own beating.”

Beadle, host of ESPN2’s SportsNation, continued with a series of tweets. She said that “Violence isn’t the victim’s issue. It’s the abuser’s. To insinuate otherwise is irresponsible and disgusting.”

By Monday, Smith had tweeted several times trying to clarify his comments but observers saw his efforts as worsening his situation.

Smith eventually apologized on air Monday on ESPN2, saying, “My words came across as this was somehow a woman’s fault. This is not my intent. It is not what I was trying to say. Yet, the failure to truly articulate something different lies squarely on my shoulders.

“To say what I actually said was foolish was an understatement, to say I was wrong was obvious, to apologize, to say ‘I’m sorry,’ doesn’t do the matter justice to be quite honest, but I do sincerely apologize.”

ESPN quickly followed up with its own statement, saying, “Stephen’s comments last Friday do not reflect our company’s point of view. As his apology demonstrates, he recognizes his mistakes and has a deeper appreciation of our company values.”

The network followed up with the week-long suspension. Chief executive John Skipper told ESPN staff in a memo it was done after a “thoughtful discussion” about appropriate actions with men and women in his company.

“I believe his apology was sincere and that he and we have learned from what we’ve collectively experienced,” Skipper said.

Smith will not appear on First Take or ESPN radio until Aug. 6, the network said.

Material from the Associated Press and several online sources was used in preparing this report.