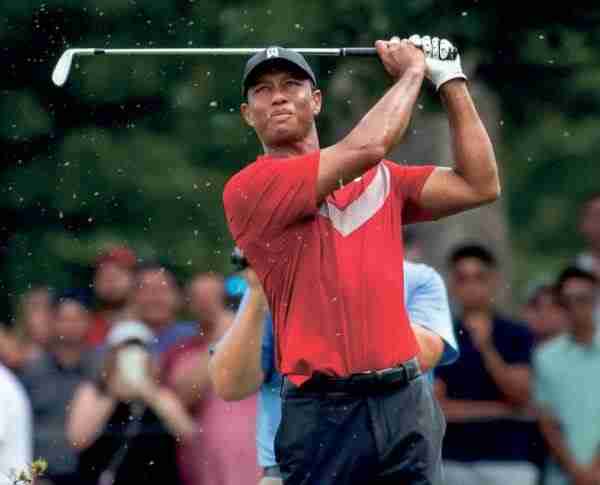 San Diego (AP) — The expectations seem to get higher even as Tiger Woods gets older.

Isn’t it supposed to be the other way around?

Of course, it doesn’t quell expectations when Woods is the Masters champion. Just the image of that red shirt under a green jacket was enough to believe he could win at least three more majors to catch Jack Nicklaus.

And then there’s Japan. That’s where Woods returned from a two-month break following maintenance surgery on his left knee and went wire-to-wire in the Zozo Championship. It was his 82nd victory on the PGA Tour, tying the record that Sam Snead had to himself for the previous 69 years.

Need more? Look no further than Royal Melbourne, where Woods split time as Presidents Cup captain and player, and he won all three matches he played. He was particularly crisp on a course that demanded precision.

And now he returns at Torrey Pines, where he has won eight times in his pro career, including the 2008 U.S. Open. Woods showed up Tuesday morning in the drizzle of a gray sky. GolfTV, with which he has an endorsement deal, was there to document Woods tying his shoes at his car and walking through the parking lot.

The next victory is for the record, if not now then soon.

“Just trying to get to 83 … I really don’t think about it because I have to think about all the things I need to do to win the tournaments,” Woods said. “There’s so many different shots I have to play, and strategy, and thinking my way around the golf course, that I’m more consumed in that.”

Good health is tantamount to good play, particularly for a guy who turned 44 last month and has had more back surgeries (4) than victories (3) in the last ﬁve years.

And as much resiliency as Woods has shown in returning from so many dark times brought on by so much uncertainty, there is a practical side to him. It’s never easy to win, no matter how often he once made it look that way.

One of the more telling moments was at this tournament in 2008. Woods made birdie on the 18th hole of the tougher South Course at Torrey to open with a 67. John Wood, at the time caddying for Hunter Mahan in the group ahead, stayed behind to watch and said, “He just won two tournaments with one round.” Woods won by eight shots that week, and the U.S. Open that summer.

He was 32, still ﬁve months away from surgery to rebuild his left knee. Winning is harder than ever, mainly because of his age. The competition is younger and deeper than ever. Woods plays Thursday alongside Collin Morikawa, who wasn’t born until Woods already had three PGA Tour victories.

“When I was younger, I had more good days than bad, feeling-wise,” Woods said. “Now at 44, I feel more bad days than I do good days. I think all of you at my age or older can relate to that. I think that’s the hardest part about being an older athlete. You see it all the time at the Masters.”

He mentioned Fred Couples and Bernhard Langer, who were in the mix at Augusta National well beyond 50, but faded at some point on the weekend.

“It’s hard to put it together for all four days as you get older,” Woods said. “It’s just harder.”

Woods wasn’t that old when he won his ﬁfth Masters in April, but given his health ordeals, he might feel that way. He didn’t fade — he’s Tiger Woods, and they’re not — though he needed help for the ﬁrst time in his 15 major wins.

“I’ve been able to have won a few tournaments since I’ve made my comeback, and hopefully, I win some more,” he said.

Woods spoke on the day Nicklaus turned 80. Of Nicklaus’ record 18 majors, what stands out is the last one in 1986 at the Masters. One tale from that week was a story by Tom McCollister in the Atlanta Journal-Constitution, who assessed his chances by writing that “Nicklaus is gone, done. He just doesn’t have the game anymore.”

Only two players older than 46 had ever won a major, none since then. So it was a surprise.

Would anyone be surprised if Woods repeated at Augusta National? Probably not. Winning anywhere again to set a new standard of winning on the PGA Tour? That’s practically a given, isn’t it?

Woods isn’t willing to look that far ahead. Even when his biggest challenge is time, there is no urgency about him. He chose not to look back at time lost when he was putting his personal life back together after his notorious divorce, and then putting his body back together from leg and back injuries.

In the decade after Woods won his 14th major at Torrey Pines, he didn’t even play in 14 majors. And there was a time not long ago he wasn’t sure he would play again.

“Yes, there were a number of years where I didn’t compete and didn’t play, so those were some missed opportunities,” he said. “But granted, I’m playing again now so these are blessed opportunities. I didn’t think I would have these.”

Young or old, that doesn’t change.