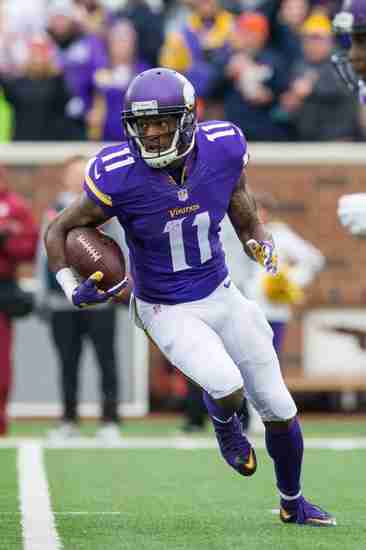 CHICAGO (AP) – Sam Bradford and the Minnesota Vikings were rolling as the NFL‘s last undefeated team. Now, they can’t even beat the last-place team in their division.

Bradford got sacked five times behind a leaky offensive line and the Vikings dropped their second straight in a stunning 20-10 loss to the Chicago Bears on Monday night.

“We’re a good team,” guard Brandon Fusco said. “It’s not us. It’s not Viking football. That’s what is frustrating, we’re such a good team. What we’re putting out on the field is not us. We have to watch the film and get better from this.”

The Vikings (5-2) lost their second straight following a defeat against Philadelphia last week. And if there was any doubt the blueprint to beat them was out, it got squashed with this loss.

Cutler threw for 252 yards and a touchdown after missing five games with a thumb injury, rookie Jordan Howard ran for a career-high 153 yards and a TD and the Bears (2-6) dominated in the trenches en route to a stunning victory.

Here are some things to know about the Vikings’ loss to the Bears.

OFF LINE: The Vikings have allowed 11 sacks the past two weeks. If that doesn’t say it all, what does?

Their tackles once again got dominated.

Jake Long was out of football and hoping to get a chance to prove his right knee was healthy again when the Vikings signed him on Oct. 11. The Vikings moved T.J. Clemmings to right tackle for the Eagles game and had Long at left tackle.

But he gave up two strip sacks against Philadelphia and got beaten by Chicago’s Leonard Floyd on a sack.

“We’ve got to keep Sam upright,” Long said. “I mean, when he has a clean pocket he does great things so we just can’t get him hit like that.”

CUTLER COMMITMENT: Cutler had not played since he left the second game of the season against Philadelphia. But with his future up in the air after coach John Fox wavered in his commitment to him as the starter, he made a triumphant return.

Cutler completed 20 of 31 passes, including an 11-yard touchdown to Alshon Jeffery early in the third that made it 20-3. Whether he quieted fans who thought the Bears were better off with Brian Hoyer is another issue. But that became a moot point when Hoyer broke his left arm last week in a Thursday night loss at Green Bay.

“He might have been part of that reason why guys turned it up a notch,” Fox said.

NO DEFENSE: The Vikings came in with the NFL’s No. 1 defense. The way the Bears moved, it was hard to tell.

The 403 total yards and 158 rushing yards were season highs against Minnesota. That included a 69-yard run by Howard , the longest by a Bears player in seven years.

“We missed a big one early,” linebacker Chad Greenway said. “They hit it. We missed a tackle, bad angles, as a whole defense we give it up.”

BIG PLAYS: The Bears struck big when they could, reached the end zone and looked more for Jeffery down the field with Cutler at quarterback. Those were things they didn’t do with Hoyer.

Chicago scored two touchdowns, and four Bears players had receptions of 20 yards or more. Jeffery caught four passes for 63 yards and his first touchdown catch of the year – an 11-yarder. He also had a 34-yard reception.

“I told him that I’m just going to keep coming to you,” Cutler said. “We wanted to get him vertical at some point in the game.”

The No. 9 overall draft pick has dealt with calf and hamstring injuries, but he is coming on strong.

Floyd had a sack early in this game after collecting two against Green Bay.

“We have a first-round pick out there who we think very much of,” Fox said. “He’s been up and down as far as injuries throughout his career so far, whether it was in camp, preseason and obviously the regular season. I think he’s a big boost.”