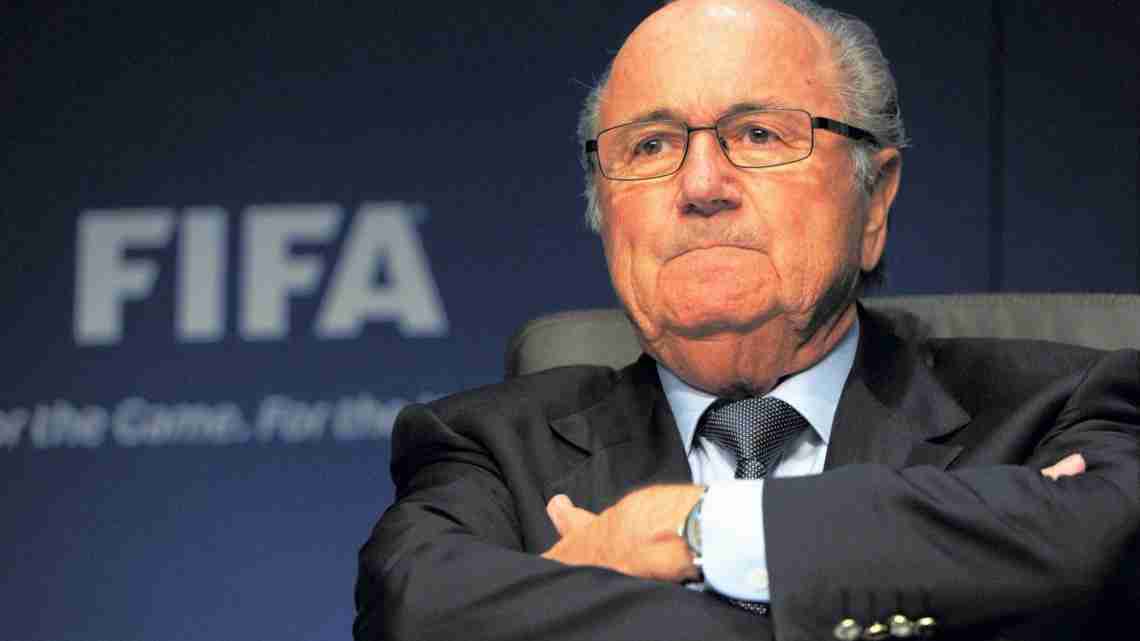 ZURICH (AP) _ Sepp Blatter will stay in control of world soccer for seven more months after resisting calls to step down immediately ahead of a presidential election, which FIFA decided Monday will be on Feb. 26.

A defiant first public appearance by Blatter since his resignation statement last month began in pandemonium as he was showered in fake money by a comedian who gatecrashed the media conference at FIFA’s headquarters.

“Where is my security?” Blatter shouted.

The interruption provided an awkward reminder of a far more serious incident for FIFA in May, when the arrest of soccer and sports marketing officials plunged the game’s ruling body into its deepest crisis.

Jolted by dual American and Swiss criminal investigations into soccer corruption, Blatter suddenly announced four days after being elected for a fifth term that he would leave FIFA.

FIFA’s executive committee decided at a meeting Monday on the February election date and Blatter ended weeks of uncertainty by insisting he would not perform one of his renowned about-turns by in fact being a candidate.

“On the 26th of February FIFA will have a new president,” Blatter said. “I cannot be the new president because I am the old president.”

The 79-year-old Blatter, who first joined FIFA 40 years ago, has held onto the most powerful job in world soccer since 1998.

Prince Ali bin al-Hussein, who lost to Blatter in May, had told The Associated Press earlier Monday: “President Blatter’s resignation cannot be dragged out any longer. He must leave now.”

But while Blatter said he felt “regret” about the crises, he insisted he would not be “abandoning” the presidency until a successor is elected by the 209 members.

“I am still the elected president by 133 national associations and I will use my mandate as president … to make sure that when at the end of February I come at the end of my career I can say the FIFA we have started again _ with the reforms,” Blatter said, highlighting the need to “rebuild the reputation of FIFA.”

The Feb. 26 date was seen as a political victory for Blatter over UEFA and other confederations, who thought they had agreement on Sunday for Jan. 15. Instead, Blatter and senior vice president Issa Hayatou cited the importance of the second-tier African Nations Championship _ a tournament for little-known home-based players _ hosted in Rwanda from Jan. 16-Feb. 7.

Presidential candidates must gain five nominations from FIFA’s 209 member associations by an Oct. 26 deadline. Only former Brazil great Zico and Liberia football federation president Musa Bility have so far expressed their intention to stand. Other potential candidates are Prince Ali and UEFA President Michel Platini, who is still mulling over his decision.

“He loves the fact that UEFA is associated with football on a daily basis and the thousands of matches we organize,” Platini’s spokesman, Pedro Pinto, said outside FIFA headquarters. “FIFA is a more political organization and he is a man of football. He’s not a man of politics.”

In a statement Platini limited himself to saying: “Now we have a concrete date, which means we can look forward to new leadership which will surely bring with it new ideas and new solutions.”

Platini welcomed the creation of a reforms task force, which will consider introducing term limits, integrity checks for executive committee members and pay details. Blatter declined repeatedly on Monday to reveal his salary.

But Blatter did respond to calls from World Cup sponsor Coca-Cola and former FIFA advisers Transparency International to appoint an independent person to oversee the reforms required to shape the organization’s future.

The reforms panel will feature two representatives from the Asian, African, European, and North and Central American confederations, and one each from South America and Oceania.

“We must now make sure that the reforms outlined today will be undertaken in a swift and effective manner,” Platini said. “This is an exciting time for FIFA because we can work together to improve it and restructure it for the good of the game.”

Reformers want FIFA to appoint a respected figure from outside the sport to oversee the next election and reforms of FIFA. Kofi Annan, the former United Nations secretary general from Ghana, has been mentioned for the role.

“The rumors linking Mr. Annan to the FIFA job are just that: rumors,” Annan’s office told the AP, stressing that he is currently “fully committed” to other roles.

Bility, the Liberian federation head, said he was “very disappointed” with the Feb. 26 election date.

“It does not reflect the urgency of the situation,” he told the AP by telephone. “The anxiety, the wait cannot help knowing that we expect to have a new leadership.”

Bility said he is sure he will secure the nominations required to make the ballot.

“I am very encouraged,” he said. “You know, I am keen viewing those rumors of those who are running. I don’t see any new faces. They are all names who have been around for all these years.”

Next post Shares of PayPal rise on 1st day of trading