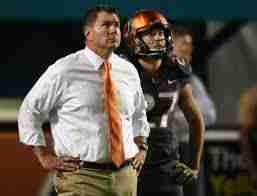 By TIM REYNOLDS
Miami Gardens – The worst loss in Miami’s storied history will be Al Golden’s last with the Hurricanes.

In a move that long seemed inevitable, Golden was fired Sunday with more than four full years left on his contract. Tight ends coach Larry Scott will take over as interim head coach, as the Hurricanes try to save their season and start yet another process of trying to reclaim lost prominence.

“Making a change mid-season in any athletic program is something I prefer not to do, as I believe coaching evaluations should take place after a season concludes,” said Miami athletic director Blake James, who told Golden of the decision Sunday night. “However, in this instance, all of our interests are best served by moving forward and looking ahead, not behind.”

Golden went 32-25 with the Hurricanes and 17-18 in Atlantic Coast Conference play, his entire stint marred by an NCAA investigation and subsequent fallout caused by things that happened before he arrived in Coral Gables. His last game with Miami was a 58-0 loss to then-No. 6 Clemson, a result that had fans booing from the stands and calling for his departure, as many angrily had for some time.

Miami (4-3, 1-2) plays at Duke on Saturday night. The Hurricanes are scheduled to resume practice Tuesday.

James said he would begin a search for the next coach “in due time,” adding that he thought Golden “has led our program through some very difficult times and he has done so with class, integrity and a true desire to see our students succeed on the field, in the classroom and in the community.”

Golden, who played for Joe Paterno at Penn State, is 59-59 in parts of 10 seasons as a head coach. He helped revitalize Temple’s program in his first opportunity as a head coach, then replaced Randy Shannon at Miami. The Hurricanes climbed to No. 7 in the AP Top 25 for a stretch in 2013, but have not finished a season in the national rankings since the 2009 campaign.

“He helped us weather a challenging time early in his tenure and he has always acted with class and integrity,” Stuart Miller, the chair of Miami’s board of trustees, said to other trustees Sunday night in an email obtained by The Associated Press. “We have many off the field achievements to be proud of.”

On the field, that was a different story.

Miami is moving on. Golden will simply be moving. He was dogged by players transferring out of Miami, big-time recruits from talent-rich South Florida often deciding to play elsewhere and having teams with obvious talent not winning enough. And he was a lightning rod for criticism for much of his time with the Hurricanes.

Golden was hired in December 2010. Before he coached a single game with the Hurricanes, Miami was hit with a massive NCAA investigation sparked by the actions of a former booster who was associated with the school long before Golden’s arrival. The school forfeited two bowl trips because of that probe as well as what would have been a trip to the 2012 ACC championship game.

Miami is still dealing with the effects of that scandal. This year’s team had 80 scholarship players, five fewer than the maximum allowed _ and that was to be the last step, Golden hoped, in finally escaping all the sanctions that Miami was handed by the NCAA in response to the extra benefits provided by convicted and currently imprisoned Ponzi scheme architect Nevin Shapiro as well as other rule-breaking inside the department.

When the Hurricanes get back to 85 scholarships, it will be under a new coach.

“Excited to see what he can do,” Goudis said.

Miami won the last of its five national championships in 2001, hasn’t appeared in what was once called the BCS bowls, the Orange, Fiesta, Sugar and Rose, since 2003. They have yet to win the ACC since joining in 2004 and haven’t even won a bowl game since 2006, the last night of Larry Coker’s regime with the Hurricanes.