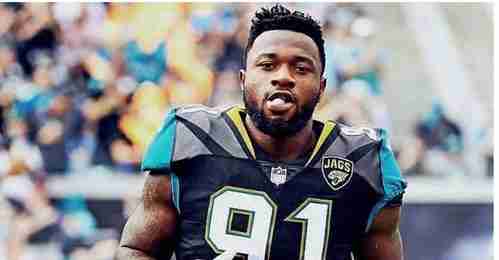 The Jacksonville Jaguars defensive end stood by his tweet accusing Incognito of using “weak racist slurs” during their playoff game, but the second-year pro declined Monday to provide more details about what was said.

“I’ve been playing this game for what, 12, 13 years now,” Ngakoue said. “I’ve never encountered nothing like that.” Ngakoue called out Incognito on Twitter hours after Jacksonville’s 10-3 victory , referring to the offensive lineman by his No. 64 jersey.

“Great win today! And 64, you goin have to come harder than some weak racist slurs. I’m proud of my African heritage, as are 70% of the other Black players in this league. (hash)Iaintjonathanmartin!”

“I just felt like people needed to know what happened,” he said. “He knows what he said. I don’t got to repeat it.”

An NFL investigation found that Incognito and two Miami Dolphins teammates engaged in persistent harassment directed at fellow offensive lineman Jonathan Martin, who left the team in the middle of the 2013 season. Incognito was suspended for the final eight games and sat out the 2014 season before joining the Bills.

Fellow Jaguars defensive end Calais Campbell said several Buffalo players were talking trash during the game, especially in the second half. But the 10th-year pro said he never heard anything inappropriate.

“(That’s) going too far, though. I understand trying to give yourself an advantage, and you see somebody trying to egg them on to try to get a penalty, I understand that. But there are boundaries. You don’t go to racial slurs; that’s not OK.”

Incognito was not present in the locker room during Buffalo’s hour-long media availability Monday. He also did not respond to a text message from The Associated Press seeking comment.

“I was next to Richie the entire game and Richie did not say one thing,”

Dawkins said. “And if he did, (you) best believe I would’ve been one of the first people to basically check him on it because there’s races. There’s a lot of stuff that’s going on in this country, and there’s boundaries. But if he did overstep, I would have said something. As far as I know, he did his thing.”

“I’ve been playing this game since I was a little kid,” Ngakoue said. “You hear all type of stuff. Stuff’s not going to bother you, but somebody says something about your ethnicity, that’s really kind of taking it a little bit too far. I’m all with trash talk.

It’s part of the game, but you can’t say certain things.”

Although Ngakoue said he didn’t tell officials or mention it during postgame interviews, he felt compelled to take his complaint to social media.

“Look at the world we live in,” he said. I’m not shocked. It is what it is. … It just goes to show you we’ve still got a lot of growing to do as a league and just as people, period. That’s why we have this platform to use to try and help bring change.”