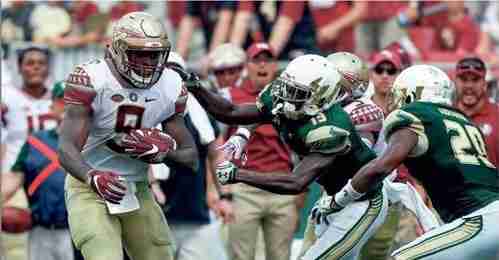 TALLAHASSEE, Fla. – Jacques Patrick spent the past two years observing and learning from Dalvin Cook at Florida State.
With Cook leaving for the NFL, Patrick is looking to put those lessons to good use.

Patrick has shown during the first two weeks of preseason practices that he’s ready to take over as the Seminoles’ lead running back, despite two other highlytouted recruits pressing for playing time.

“I was behind Dalvin for two years, and I saw the blueprint that he laid out,” said Patrick, a 6-foot-3, 231-pound junior.

“That standard and where the bar is set, you can’t go another way.”

Patrick made the most of extended playing time opportunities when he received them the past two years. He is averaging 5.4 yards per carry and has a pair of 100yard games. In his lone collegiate start, which came against Syracuse in 2015 when Cook couldn’t play due to an ankle injury, Patrick rushed for 162 yards on 24 carries and scored three touchdowns.

The Orlando native’s other 100-yard game came last season against South Florida (124 yards on 20 carries) when Florida State had 478 rushing yards in the 55-35 win.

Coach Jimbo Fisher also said that Patrick’s work ethic during the offseason has earned him the early spot as the starting back.

“He can catch, he can run, he has proven he can do it at a good level,” Fisher said.

“He understands the urgency. He’s getting to be a junior.”

Patrick added some weight during the offseason, but it hasn’t affected his speed. It has made him more durable if he takes the majority of carries early on, when the Seminoles face Alabama (Sept. 2 in Atlanta) and Miami (Sept. 16) the first month of the season.

Running backs coach Jay Graham said Patrick’s knowledge of the game has greatly improved over the past year and he’s been taking more copious notes. That has translated to a better awareness of fronts and what the offensive line is doing to create holes.

Defensive tackle Derrick Nnadi, who has gone up against Patrick often in practices the first two weeks, noted Patrick’s upperbody strength helps him fight through hard tackles to get extra yards.

“You think about, he’s been that size for a very long time. He’s understanding being able to use that at your advantage.

Being a bigger back, run physical,” Graham said. “You obviously have to make guys miss as a counter off of that. He’s doing a good job of deciding off those situations.”

Even with the departure of Cook, who is Florida State’s career rushing leader, the Seminoles have a deep stable of running backs. Five-star prospects Cam Akers and Khalan Laborn could contribute early along with sophomore Amir Rasul and senior Ryan Green.

For now though, Patrick is doing all he can to prove he can be the every-down back that Cook was the past two seasons. “I’m ready for it. I have high expectations for myself and for the position,” Patrick said. “I feel like right now that the moment is here I just work and do what I have to do.”