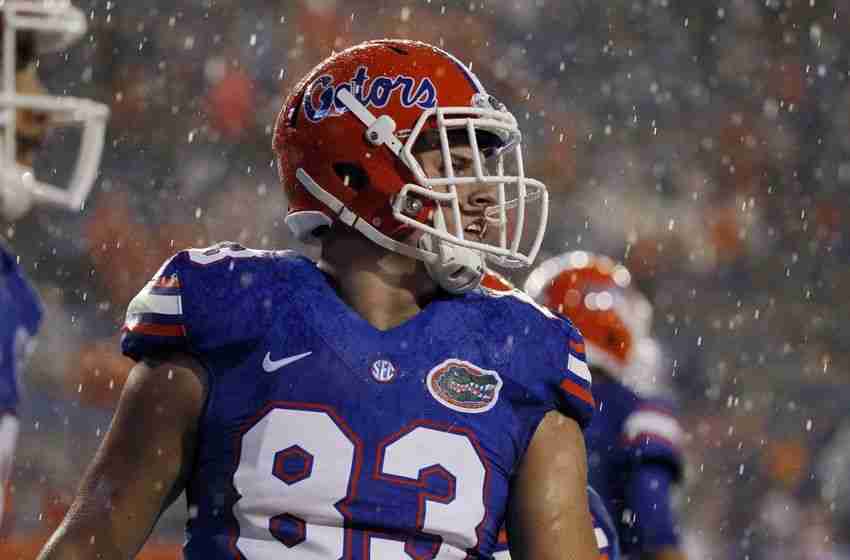 His sixth, to be exact _ with four head coaches, four offenses and two schools.

This one is his most anticipated yet. And there’s little doubt it will be better than the last.

McGee broke two bones in his left leg in last year’s opener _ he played just nine snaps _ and missed the entire season. It was a significant setback for McGee, who hoped to jump to the NFL, and for the Gators, who expected the versatile pass-catcher to feature prominently in their offense.

Now, they both get to try it again.

“I feel great. I’m excited,” McGee said. “I’ve been patient with it. They’ve done great with me. I shouldn’t be able to notice a thing this fall.”

The Gators are counting on noticeable things from McGee, a 6-foot-6, 250-pound end who has the size, speed and athleticism to pose matchup problems in the passing game. New coach Jim McElwain expects him to be one of the team’s top playmakers, along with running back Kelvin Taylor and receivers Demarcus Robinson and Brandon Powell.

“He’s a guy that’s really been accepted by his teammates,” McElwain said. “Having him back is huge at that position especially. We like to use tight ends. Tight ends really need to be able to function in a lot of different roles with the shifts and motions and things we do with them. He’s a guy who will be able to handle that. He’s a guy who’s done a great job leading his group.”

McGee turns 24 next month, so it’s somewhat natural that he would take on a leadership role. After all, he’s experienced pretty much everything.

He has played for coaches Al Groh, Mike London, Will Muschamp and McElwain, worked in a spread offense and a pro-style system, and already has one degree and is closing in on a master’s in sports management.

“I think they did it on purpose the way they set it up with the other tight ends here,” he said. “I’ve got like six freshmen here. They got me feeling a little older. They’re just getting out of high school and I’m over here on my second degree. They are talking about mandatory classes and I’m just laughing. It’s the same stuff I worried about, five, six years ago.”

McGee had plenty to worry about last season.

Taking advantage of an NCAA rule that allows graduate students who have a fourth year of eligibility remaining to transfer and play right away, McGee left Virginia for Florida last summer. McGee led the Cavaliers with 43 receptions for 395 yards in 2013, and the Gators were hoping for even better numbers in an offense that lacked difference-makers.

But McGee injured his leg in the second quarter of Florida’s opener against Eastern Michigan. McGee knew it was serious, especially when trainers wrapped his leg in an air cast and rushed him to the hospital. He had surgery later that night, a titanium rod inserted in his lower leg and attached with six screws.

“At first you’re really bummed, but you only make it harder on yourself if you get down and don’t have a good attitude,” McGee said. “It just makes the whole process even (tougher). I’m a pretty positive person, so it was just easy to keep going and support the team and do whatever I could do to help everyone else.

“You’ve got to live with it and keep going.”

McGee spent the rest of the year waiting for his leg to heal and wondering if the NCAA would grant him a sixth year of eligibility. He wrote a letter to the sanctioning body and pointed out the unique timing of his injury _ it was his first game in a Florida uniform.

After several nervous months, the NCAA granted McGee’s request in January. McGee believes he may have petitioned the NCAA at the perfect time, as it was trying to do more for student-athletes and working to pass a financial stipend to cover the full cost of attendance.

Regardless of the rationale, he’s back now and eager for another season opener. The Gators host New Mexico State on Sept. 5.

“I’m as excited for this season as I’ve ever been for a season,” McGee said.