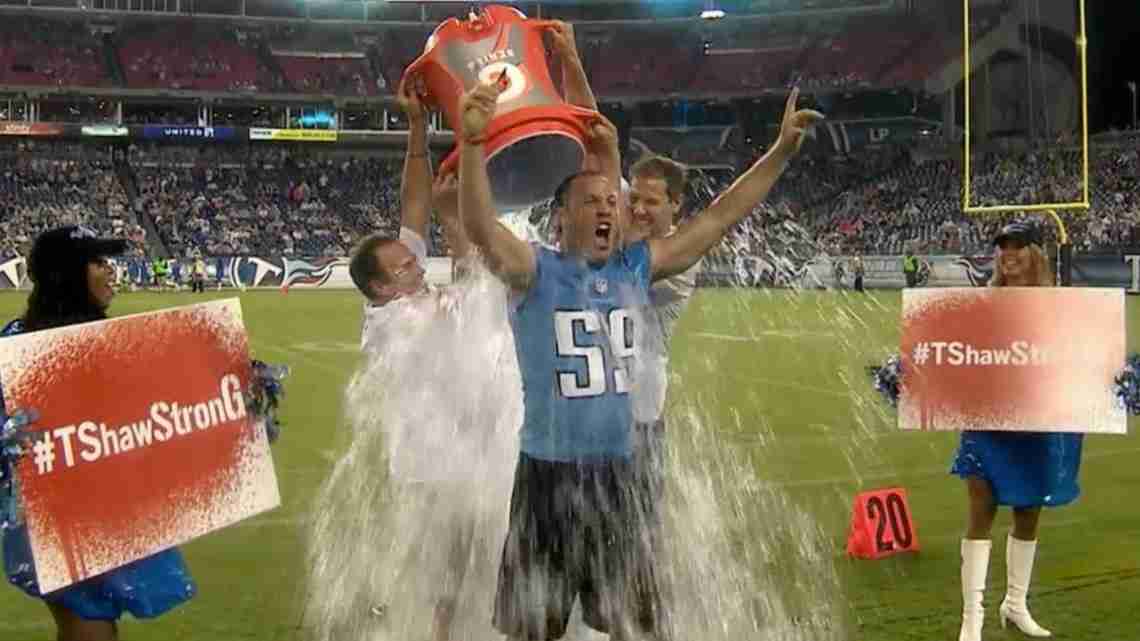 NASHVILLE, Tenn. (AP) _ Over the past year, Tim Shaw has bungee-jumped off a bridge in New Zealand, visited Australia and helped drill a well in the Amazon. The former NFL linebacker also has talked with congressmen in Washington D.C. and Tennessee lawmakers.

“People ask me all the time, `What’s on your bucket list? Are these bucket list items?”’ Shaw said. “I don’t have a bucket list. I just go. I just live. I just do, and that’s how I want to go from here on out.”

Frates was on the field Friday afternoon at Fenway Park for the official kickoff as the Boston Red Sox dumped ice water over their heads to help launch this challenge again.

About five hours before their game against the Tampa Bay Rays, the Red Sox players and coaching staff lined up in front of their dugout in warmup clothes for the drenching. Frates, smiling in front, got a bucketful of foam baseballs dumped on him. Red Sox manager John Farrell said it’s pretty amazing what Frates’ initiative has done worldwide and called the challenge a great cause.

“To be associated with the Frates family, to help bring attention to a devastating disease, we’re honored and proud to be part of that,” Farrell said. “And yet at the same time, we’ve been able to see firsthand the effects of it, and it’s devastating.”

ALS Association chief of staff Brian Frederick said a survey found that people who took part last year had been challenged, while so many others had not been asked.

“So we thought between those people and everybody who said they had so much fun doing it why wouldn’t people want to do it again?” Frederick said from Boston. “We’ll see how many willing people are to do it again. I can tell you that within the ALS community everybody’s completely fired up, and we’re all so excited to have just kicked it off with Pat and Pete at an amazing and inspiring day at Fenway Park.”

This year’s challenge has had a bit more planning with a clock ticking down to the start on the NASDAQ tower in New York along with all 30 Major League Baseball teams already set to take part. No specific fundraising goal has been set for this challenge, but Frederick said the ALS Association is looking for support.

Shaw said the money equals hope because that supports drug research, which leads to better lives.

He shot a video of himself getting dunked with ice water last week and has challenged his former Titans teammates and cornerback Jason McCourty for a second straight year. He also offers the advice to take part in all three pieces of the challenge from having dumped over the head, donating money and then challenging someone else with the result helping build awareness.

“That means you’re in it, and you’re deciding that you want to fight with us so it’s an honor,” Shaw said.