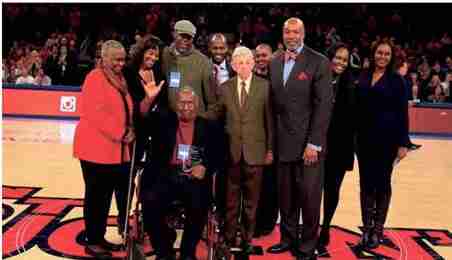 NEW YORK – St. John’s University is mourning the loss of basketball great Solly Walker, who was the school’s first black player in the 1950s. Walker died last Friday. He was 85.

Walker was born in South Carolina and moved to Brooklyn with his family as a child. Walker played at St. John’s from 1951-54.

He came to St. John’s from Boys High School in Brooklyn and played in 78 games, scoring 573 points and grabbing 496 rebounds during his collegiate career. In his first year at St. John’s in 1950-51, Walker led the freshman team to a 17-2 record by averaging 15.1 points per game. He also helped lead the school to the NCAA championship game, the first of the school’s two Final Four appearances.

He was one of the most influential student athletes in St. John’s program history. Originally, he was not welcome on the team’s road trip to Lexington, Ky. to play Adolph Rupp and the Kentucky Wildcats because of segregation issues in the south.

Instead of leaving him in Queens while the team made the trek down to Lexington, St. John’s head coach Frank McGuire brought his best player on the trip.

Due to the Jim Crow laws and racial issues, McGuire had to protect the sophomore forward by eating meals with him in the kitchen of the team hotel and sticking by his side when they entered the arena.

“I learned a great deal from my experience with Coach McGuire as to how to treat people,” Walker said in the St. John’s “100 Years of Basketball” anniversary book. “The situation against Kentucky was uncomfortable. After all, I was only 20-years-old. My confidence in my coach made me feel very secure.”

During the actual game on Dec. 17, 1951, Walker hit six of his first seven shots and gave St. John’s an early advantage on the road.

However, just minutes into the game, Walker was injured by an opposing Wildcat and was forced to leave the court for the remainder of the evening due to a significant injury.

The Johnnies were defeated by Rupp and company that day, but Walker and St. John’s broke another barrier as the sophomore was the first African American to ever play a basketball game in Kentucky against the Wildcats.

In 1952-53, Walker helped St. John’s advance to the National Invitation Tournament (NIT) title game by averaging 7.0 points and 6.0 rebounds per contest. He played in all 23 games as the team posted a 17-6 overall record.

After college, Walker was drafted by the New York Knicks, but chose to pursue a long career with the New York City Board of Education, starting as a teacher and eventually serving as principal of the Manhattan School for the Multi-Handicapped.

Walker was a 1993 inductee into the St. John’s Athletic Hall of Fame and was also presented the Trustees Award by the NYC Basketball Hall of Fame commemorating his remarkable career.

Memorial services include a public viewing on Monday, May 8 from 9 to 11 a.m. followed by a celebration of life beginning at 11 a.m. at Siloam Presbyterian Church, located at 260 Jefferson Avenue in Brooklyn.