Fullback Bruce Miller back on the field for 49ers 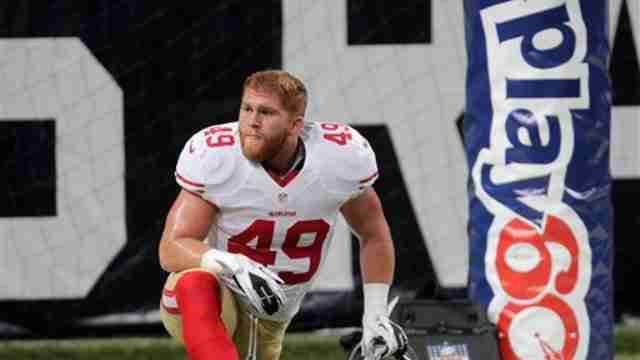 “I want to apologize to everyone that this had a negative effect on,” Miller said Friday. “Completely understand the expectations of me. I have the same expectations. We’re on the same page. … I’ve completely committed to taking the steps necessary to be here and be a part of this football team.”

Miller pleaded no contest Tuesday to a misdemeanor disturbing the peace charge stemming from an argument with his former fiancee that led to his arrest March 5, which was investigated as a domestic violence case. Santa Clara County prosecutors said that Miller smashed the woman’s cellphone.

He must attend a 16-week domestic violence counseling course as part of his sentence to deal with any anger issues, Santa Clara County prosecutors said. Details of the counseling are still being ironed out, and Miller said he would complete that.

Miller said he never made physical contact with the woman.

“Didn’t happen, no,” he said. “That was another thing I had to learn. People are going to think what they want to think. The people who know me, I didn’t have to explain myself one time.”

Miller returned to team headquarters Wednesday and met with general manager Trent Baalke and coach Jim Tomsula. Miller was back on the field for the 49ers as they wrapped up organized team activities Thursday and Friday.

“Onward and upward, moving forward,” Miller said. “It’s great to be back here with the guys and feel a part of the team and get back to doing what I know how to do, and that’s play football.”

The fifth-year pro had been working out in the Santa Clara area but was away from the 49ers during the offseason workout program at team headquarters. He said, “It’s been a difficult one.”

A key run blocker for departed franchise rushing leader Frank Gore, Miller had 18 catches for 189 yards and two touchdowns last season for the 49ers, who went 8-8 and missed the playoffs for the first time in four years. He received a three-year contract extension last year.

Quarterback Colin Kaepernick and wide receiver Torrey Smith were excused by Tomsula from the optional practice to be in the Cleveland area for a charity event Saturday run by Joe Haden. The players also will do a Make-A-Wish Foundation visit for a 14-year-old teen named Tommy with terminal brain cancer.