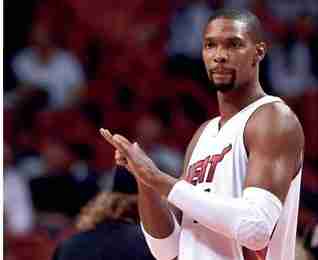 MIAMI – Chris Bosh has a new job, yet does not sound like he’s abandoning his old one.

More than a year removed from his last NBA game, Bosh said during his debut appearance as an analyst for Turner Sports’ “Players Only” programming that he’s working out – indicating that he has not ruled out trying to play again.

Bosh said even his children are asking when he’s returning to the NBA, but he did not discuss any specifics about either that or whether he’s still battling the blood clots that derailed his 2014-15 and 2015-16 seasons – both times at the All- Star break. Bosh remains under contract with the Miami Heat, but has not been with the team this season after failing a physical in September.

His last NBA game was Feb. 9, 2016. A blood clot was found in his calf two days later, he went back on blood thinning medication and his playing future has been most uncertain ever since.

Bosh has watched Heat games on television, continues to have a spot in the team locker room and is in contact with some players from time to time. He hasn’t been around the team, though, and said not having the sort of schedule that he grew used to during his 13 NBA seasons was more difficult to deal with than he would have envisioned.

“I think one of the interesting things that I didn’t anticipate was my mental health, and that’s something that as athletes we have to take into regard because we’re used to a set schedule and we’re used to a certain type of world,” Bosh said. “And that’s something that I’ve really had to work on for my well-being.” Bosh will continue as an analyst for Turner for the next four Mondays, running through March 27.

The Heat played Monday night in Dallas, and when the highlights of the Mavericks’ victory were shown the in-studio conversation between Bosh, Webber and fellow analysts Isiah Thomas and Baron Davis turned to Miami.

Bosh lauded what the Heat have done in salvaging the season after an 11-30 start, adding that he is “proud of a lot of the guys.”

Bosh did not offer any hints about his future, nor did he specifically say that he plans on returning to the NBA.

Because he has been sidelined for more than a year, the Heat can choose at any time to initiate a process where his contract would be removed from their salary cap. It’s unclear when the Heat will choose to do so, though with Bosh owed more than $52 million over the next two seasons _ money he is guaranteed – it is certain Miami will seek the cap relief at some point before next summer. Bosh also didn’t reveal what he tells his kids when they ask about his comeback plans.

“I’m getting pressure from them too,” Bosh said.