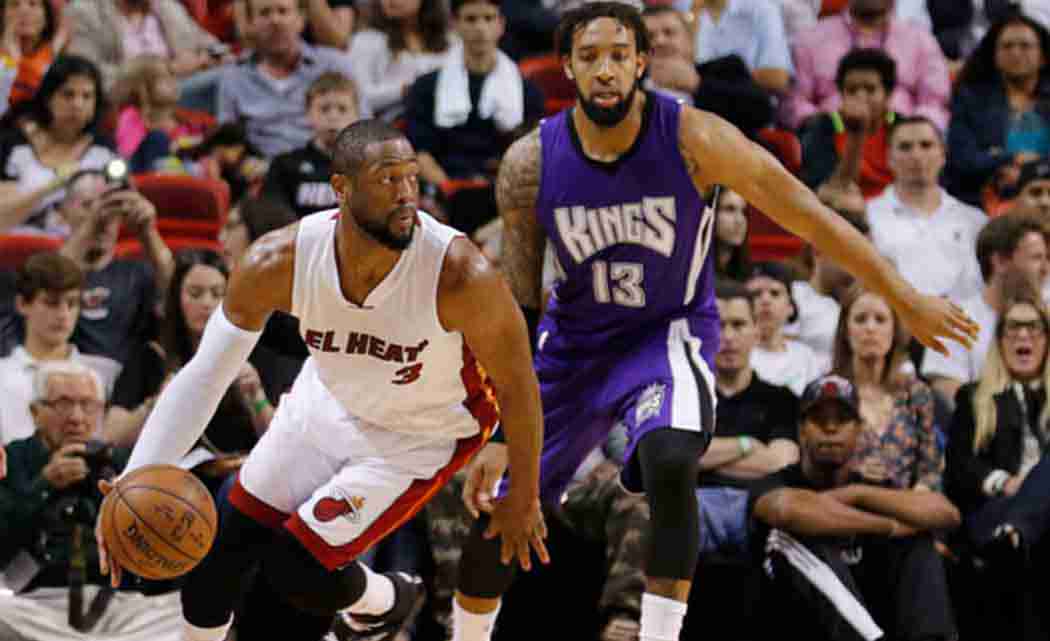 MIAMI — Down by 35 on Friday night, the Miami Heat almost pulled off an incredible comeback.

Down by 16 on Saturday night, they were barely fazed.

Dwyane Wade scored 28 points, Tyler Johnson’s 24-point effort was capped by a backbreaking 3-pointer as the shot clock was expiring with just under a minute left, and the Heat found a way to beat the Sacramento Kings 114-109 in overtime and move back to No. 8 in the Eastern Conference playoff race.

“What we talked about just in the locker room right now, at halftime, before the game, at the walkthrough, was developing this grit and a competitive character,” Heat coach Erik Spoelstra said. “And this group is showing some grit, where they’re not feeling sorry for themselves, they’re not making excuses, they’re just enjoying the competition.”

Michael Beasley scored 18 points and gave Miami big minutes against DeMarcus Cousins while playing the middle of a Heat zone defense. Mario Chalmers added 12 and Henry Walker and Chris Andersen each had 11 points for the Heat, who _ almost unbelievably _ have won three straight home games for the first time all season.

“There’s been a lot of nights this season that just don’t make no sense,” Wade said. “But nights like this that end the way they did, we’ll take it.”

Cousins had 27 points and 17 rebounds before fouling out in overtime for Sacramento. Rudy Gay scored 27 points, Ben McLemore added 20 and Derrick Williams had 10 for the Kings, who missed two short shots that would have won it in the final moments of regulation.

A night after nearly erasing a 35-point deficit in Washington, Miami had to rally again _ and this time, pulled it off. The Heat were down 12 with 11 minutes left in regulation and trailed by as many as 16.

The Heat played with nine players, every one of them getting in before the first quarter was over. They were down to eight after halftime, with Udonis Haslem forced to sit out because of more injuries.

In all, 47 percent of the Miami roster was unavailable by game’s end _ Chris Bosh (blood clots on lung) is out for the season, Josh McRoberts (knee surgery) is presumably done for the season, Goran Dragic was held out with a back injury, Luol Deng sat for the second straight night with a thigh injury, Hassan Whiteside was ruled out because of a sore ankle and Zoran Dragic is in Sioux Falls with Miami’s NBA Development League team.

“We’re showing perseverance, man,” Beasley said. “We’re literally giving it everything we have _ which isn’t a lot right now. But we’re showing character, if nothing else.”

Wade’s turnaround from the right post put Miami up 91-90, and Walker’s 3-pointer with 2 minutes left in regulation pushed the lead to four. Another score by Wade, this time on a drive, restored the four-point edge.

After Beasley fouled out with 1:07 left, the Kings wound up tying it with pair of free throws by Cousins and then a score by Andre Miller. Gay and Cousins both missed close shots in the final 3 seconds, and to overtime they went tied at 96.

“We’ve just got to take care of the ball,” Cousins said. “I think we did a pretty good job early on and then we just got careless with it.”

Next post Huberdeau's SO goal lifts Panthers over Islanders 4-3