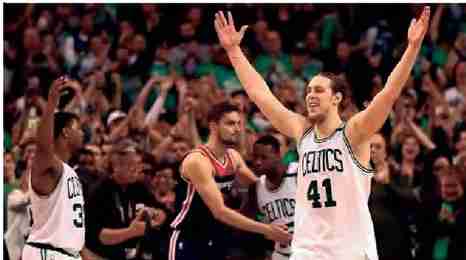 BOCA RATON, Fla. – Habits are something Miami coach Erik Spoelstra talks about often with his club, that word becoming as much of his everyday vernacular as probably any other.

Kelly Olynyk has noticed. He’s also noticed that habits can be tough to break.

High on the to-do list for the Heat during this training camp that ended with a scrimmage Saturday was this: Getting Olynyk, the former Boston Celtics forward who signed a four-year deal with Miami this summer, as involved as possible with a core that largely returned intact from last season. It’s a process, though both Spoelstra and Olynyk said afterward they like the way things are heading.

“When you’ve been in this league for four, five years, whatever it is, and where you were you’ve done it one way the whole time, that’s kind of ingrained in your mind,” Olynyk said. “And over four, five years those actions become habits and those habits become routines and rituals. Now when you flip the script and you’re getting into a game or a scrimmage, your body automatically drives toward those habits rather than what you’re quote-unquote supposed to do.”

Old habits indeed die hard. When Heat guard Josh Richardson went down the lane in the third quarter of the scrimmage, Olynyk – who was a bit of a pest, to put it nicely, in past games against Miami = sprang into action and defended the paint with his usual vigor.

Richardson got a bloody nose for his efforts.

“He can foul someone else now,” Richardson said.

Richardson could at least laugh about it afterward, and after a scrimmage where Olynyk’s inside game, outside game, passing ability and defensive aggression were all on display at various times, Spoelstra seemed quite content.

“To be fair, we’re getting to know him,” Spoelstra said of the noticeably slimmeddown Olynyk. “We want to be open to his skillset. We want to challenge ourselves to be able to utilize that versatility in as many dynamic ways as possible, but do it at a healthy rate.”

Miami is bringing back its top nine scorers in terms of points-per-game from a season ago, plus has Justise Winslow returning from shoulder surgery and is finding ways to get Olynyk and rookie Bam Adebayo in the mix as well.

That’s a lot of candidates, and not enough jobs. It’s tough to envision Spoelstra ever going past 10 players in his normal rotation, 11 at the most. But Olynyk was able to show his new teammates right away that he could be a big help for a team that went 30-11 in the second half of last season.

“Kelly just fit right in because of so many things he can do,” Heat guard Dion Waiters said. “He’s a guy who can stretch the floor, he can post up, he can pass the ball out of the post, he can do a lot of different things.”

Those are the habits the Heat want.

NOTES: Miami opens its six-game preseason schedule Sunday at home against Atlanta. … PG Goran Dragic didn’t play much in the scrimmage, since the Heat are still being cautious with him after all the work he did this summer leading Slovenia to gold at the European Championships. … Spoelstra, on what got done in camp: “How hard we want to play, that habit, that disposition, the commitment defensively, we laid the first few bricks of the foundation. We still have a ways to go with that.”