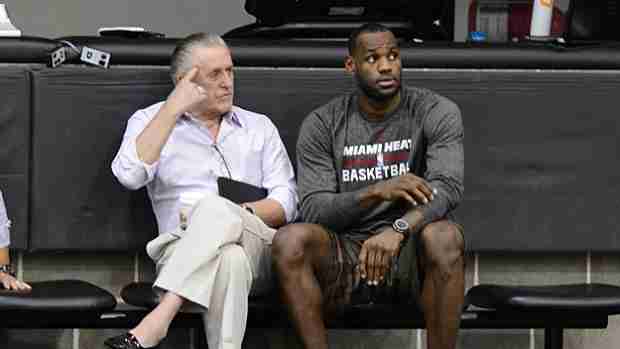 LAS VEGAS — LeBron James worked out and had a meeting agenda Tuesday. In another summer of NBA Free Agent Frenziness, if James knows where he will be playing next season, he still isn’t saying.

Asked by The Associated Press how free agency was going when his afternoon meeting agenda was apparently complete, the four-time MVP said “no complaints.” He offered a quick greeting and provided no hints of anything – including when his next “Decision” will be known – before leaving with a wave. The entire exchange lasted about eight seconds.

James, who has been relatively quiet while weighing his options, never broke stride. He was upstairs in an exclusive part of a Las Vegas hotel Tuesday, holding court for a little more than three hours before emerging in the lobby, walking toward his assembled brain trust – including longtime manager Maverick Carter and Nike representatives, a sponsor of the LeBron James Skills Academy he’d be hosting in Las Vegas – and got whisked away.

James was expected to meet with Miami Heat President Pat Riley before making a final decision on his NBA future. A person close to the situation said that meeting had not happened as of Tuesday afternoon. The person spoke to The Associated Press on condition of anonymity because no one has publicly announced the date of the meeting.

Some of James’ representatives have met with several teams, including the Cleveland Cavaliers.

After filming a TV commercial in Coral Gables on Monday, James flew to Las Vegas, which was planned because of his academy. Later this week, he’s expected to travel to Brazil to the World Cup final.

He took time Tuesday morning to work out with Dwyane Wade in Las Vegas before his meetings, another person close to the situation told the AP. Like James, Wade has also not announced his plans for next season and beyond, though it is still largely expected that the 2006 NBA Finals MVP and three-time champion will remain in Miami. James’ future remains anyone’s guess.

And it appears the buildup to his second foray into free-agent craziness will last longer than the one that culminated in his going to Miami in 2010. He made that announcement on July 8, 2010 – exactly four years ago Tuesday.

Unlike 2010, James has kept a much lower profile during his courtship. While he was on a family vacation, his agent, Rich Paul, met in Cleveland with the Cavs, as well as the Houston Rockets, the Dallas Mavericks, the Los Angeles Lakers and the Phoenix Suns. All of them pitched plans as to why the 29-year-old superstar should sign with them.

James wanted to contain the madness that surrounded his first foray into free agency four years ago but the growth of social media turned the past week into an endless storm of rumors, speculation and baseless media reports.

While James may be nearing an announcement, that won’t come until he’s met with Riley. And the Heat have been making moves, as well, announcing Monday that they intend to sign forwards Danny Granger and Josh McRoberts, two free agents, to bolster their roster.