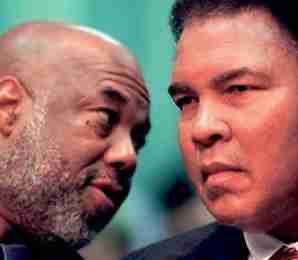 No cause of death was given, but another friend, sportswriter Mohammed Mubarak, said Bingham had been in failing health in recent months after undergoing two surgeries.

During a friendship that spanned more than half a century, Bingham took literally hundreds of thousands of photos of Ali that ranged from the three-time world heavyweight champion’s many ring triumphs to quiet day-to-day moments with his family.

He captured the young, handsome champion preparing for his first heavyweight championship fight against Sonny Liston in 1964 and, years later, the aging Ali, hands shaking from Parkinson’s disease, preparing to light the flame opening the 1996 Olympic Games.

He photographed Ali greeting everyone from former President Bill Clinton to South African President Nelson Mandela to black Muslim leader Malcolm X. And he was there with his camera when throngs of awe-struck fans surrounded the champ on the street.

Although known largely as Ali’s photographer, Bingham also had a distinguished career as a freelancer.

He photographed the 1967 race riots in Detroit and was at Chicago’s Democratic National Convention in 1968 when violence exploded between protesters and police.

In the 1960s he developed enough trust with the fledgling Black Panther Party that its members gave him free reign to photograph them – and their weapons stash – for a feature Life magazine had planned.

After the story was not published – “They got scared,” he later told the Los Angeles Times – he included the photos in his 2009 book, “Howard L. Bingham’s Black Panthers 1968.”

“He was one of the greatest storytellers of our time,” said Werner. “You look at the history in his photos. And the photos themselves, they’re just amazing.”

The public has never seen some of the best of Ali, Werner added, because the unfailingly modest Bingham never wanted people to think he was cashing in on their friendship. But he did publish a book including some of them in the acclaimed 1993 photo memoir, “Muhammad Ali: A Thirty-Year Journey.”

Bingham started off his career in 1962 as a fledgling photographer for the small African-American Los Angeles Sentinel newspaper, and was assigned to cover a fight by an up-and-coming young boxer then known as Cassius Clay.

He would tell Ali years later he had no idea who he had been sent to photograph, but when he saw him and his brother wandering around downtown after the fight he offered to show them around. Later, he invited them to his mother’s house for dinner.

It was the beginning of a friendship that would endure until Ali’s death in June.

The eldest of seven siblings, Bingham was born in Mississippi on May 29, 1939, and moved to Los Angeles as a child.

He eventually enrolled in Compton Community College, where he failed a photography class. He blamed it on spending too much time having fun and not enough studying.

But he applied to be a photographer at the Sentinel a few years later and, after repeated inquiries, he was finally hired.

“I went off on jobs, came back with underexposed film, blurred film, no film – and I always had an excuse for what went wrong,” he told the Times.

Eventually he learned enough about photography on the job to land the Ali assignment.

Bingham is survived by his wife, Carolyn, and son, Dustin. Another son, Damon, preceded him in death.