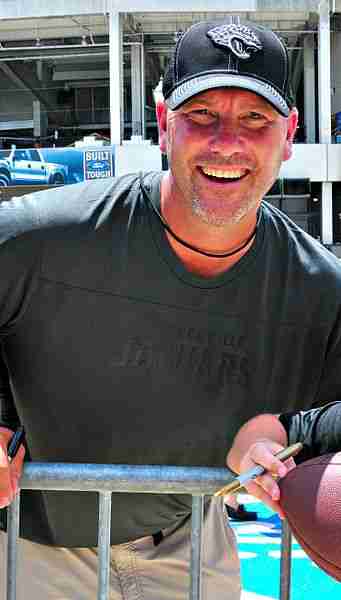 This was supposed to be Jacksonville’s year, the time for coach Gus Bradley’s always-positive approach to pay dividends with a drastically improved roster.

Owner Shad Khan spent big in free agency for the second straight offseason and felt he had all the pieces in place for a playoff push. Khan even said a winning record was “everybody’s reasonable expectation.”

The Jaguars fell way short. And it cost Bradley his job.

Khan announced the move a little more than an hour after a 21-20 loss at Houston, in which the Jaguars (2-12) blew a nine-point lead in the fourth quarter. Khan considered firing Bradley in late October, following a debacle at Tennessee on national television, but opted to keep him in place for seven more weeks. During that time, Jacksonville lost to backup quarterbacks Tom Savage (Houston), Paxton Lynch (Denver) and Nick Foles (Kansas City).

Bradley finished 14-48 in four seasons in Jacksonville, the worst winning percentage (.225) of any NFL coach with at least 60 games.

“It is unfortunately evident that we must make a change,” Khan said in a statement. “I thought it would be best to do it immediately after today’s result so Gus can step away, relax and regroup with his family during the Christmas and holiday season.”

Some thought general manager Dave Caldwell also would be shown the door, but Khan said Caldwell will “be charged with exploring all options to hire the best head coach possible to lead what I feel is an extremely talented team and reward a very loyal and patient fan base in Jacksonville.”

A former Seattle defensive coordinator who had no head coaching experience when Khan hired him in 2013, Bradley spent his first two years in rebuilding mode. Bradley and Caldwell overhauled a talent-starved roster, revamping it through the draft and then supplementing it in free agency. The Jaguars spent more than $350 million (nearly $150 million guaranteed) the last two years in free agency, hiring an influx of starters who were supposed to make a difference.

Instead, the Jaguars showed little improvement, at least in the win-loss column.

“Gus Bradley will one day be known as a master mind, we let you down Gus,” veteran defensive tackle Roy Miller posted on Twitter. “Sometimes innovators are ahead of their time.”

Bradley was ultra-popular inside the facility, a player’s coach with an infectious personality and an upbeat attitude that never changed – even as the losses mounted.

He was loyal to quarterback Blake Bortles even as he was mostly a mess this season. His sloppy mechanics caused inaccuracy and inconsistency every week. It didn’t help that receivers dropped passes, tight end Julius Thomas was unreliable and the offensive line was far from stout.

Jacksonville made a huge jump defensively, becoming a top-10 unit thanks partly to the addition of defensive tackle Malik Jackson, defensive end Yannick Ngakoue and rookie cornerback Jalen Ramsey. But the defense lacked a consistent pass rush and failed to create turnovers. Couple those shortcomings with Bortles’ penchant for interceptions and fumbles, and it’s no surprise the Jaguars were among the worst in the league in turnover margin.

Bradley will be remembered for his indefensible career record, while slow starts and an inability to win at home were major stumbling blocks.

Jacksonville went 5-25 in September and October under Bradley, digging huge holes and essentially falling out of playoff contention before Thanksgiving. And the Jags failed to find success at home, going 7-20 at EverBank Field. They are 0-6 there this season, with the season finale Saturday against Tennessee.