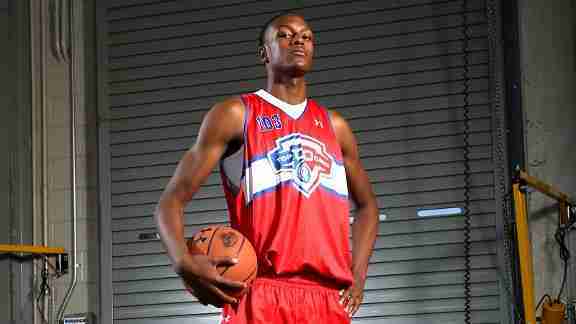 SALT LAKE CITY (AP) _ The Utah Jazz are looking for shooting and front-court depth. Myles Turner and Trey Lyles think they can help.

The Jazz worked out Turner and Lyles on Saturday in preparation for the upcoming NBA draft. The pair was part of the second of two groups.

Several power forwards with range have been linked to Utah for the No. 12 overall pick on June 25, including Turner and Lyles. The Jazz have worked out 72 players.

The 7-foot, 239-pound Turner is known for his shooting touch and shot-blocking skills. He spent one year at Texas and was named Big 12 Freshman of the Year. He averaged 10.1 points and 6.5 rebounds while hitting 45.5 percent of his shots and 83.9 percent of his free throws. The Jazz workout was his first with an NBA team.

Turner said he can play power forward or center and is working on his conditioning. He wants to add weight and fine-tune his post play.

“My numbers were pretty bad shooting in college, but I’m definitely a lot better shooter than what I showed. I’ve been working on it a lot more. Just have to be a little more consistent. … NBA (3-pointer) is definitely something I’m working on.”

Lyles said his game also was limited during his lone season at Kentucky. The 6-10, 241-pound Lyles is versatile, with strong ball-handling ability for his size.

He was named to the Southeastern Conference All-Freshman team after averaging 8.7 points, 5.2 rebounds and 1.1 assists in 23 minutes a game. Lyles said he wanted to show his basketball intelligence and that he can be an “instant threat” both offensively and defensively.

“There’s a lot of versatility to my game I didn’t get to showcase,” Lyles said. “It’s just because the team didn’t need it from me. I really didn’t complain about it because we were winning _ 38-0, there’s nothing you can say.

“Just being a playmaker with the ball, without the ball. Making plays for myself and teammates and just more of my versatility on the perimeter and in the post.”

Turner and Lyles downplayed the direct competition between the two, though both are expected to be selected in the same range. They said they have ignored mock drafts and that all workouts are treated equally _ regardless of the team or who else is in the session.

“They weren’t against each other the whole workout,” Jazz vice-president of player personnel Walt Perrin said. “Both of them performed well when they went against each other. They each have strengths that they went to. And we noticed some things they needed to work on.”

Perrin called Lyles a smooth ball-handler that Turner could have trouble guarding on the perimeter. He said Turner could guard bigger power forwards and has an inside-outside offensive game.

Notre Dame point guard Jerian Grant also was part of Saturday’s second session and is expected to be a first-round pick. The Jazz, however, used their first picks to add rookie point guards the last two years _ Dante Exum and Trey Burke.

The Jazz are scheduled to work out Kansas forward Kelly Oubre on Sunday, another possibility at No. 12.

“I think the draft has some good players in it,” Perrin said. “I don’t know how many I can look at and say are All-Stars, but I think there’s some very good rotational (players), some possible top starters later down the road.

Next post Possible new insecticide use in Montana wheat harvesting