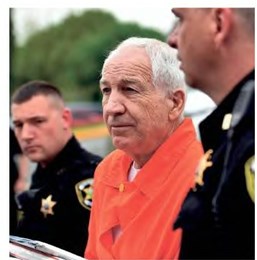 BELLEFONTE, Pa. (AP) _ Jerry Sandusky’s resentencing on a 45-count child sexual abuse conviction is on hold, and it’s not clear when it will happen.

Judge John Foradora issued an order Monday saying the Sept. 23 proceeding won’t take place as scheduled. The former Penn State assistant football coach had been sentenced to 30 to 60 years after his 2012 jury conviction.

But an appeals court ruled in February that mandatory minimums had been improperly applied.

Defense lawyer Al Lindsay declined to comment on the reason for the judge’s order.

Sandusky was convicted of the sexual abuse of 10 boys, including attacks on campus.