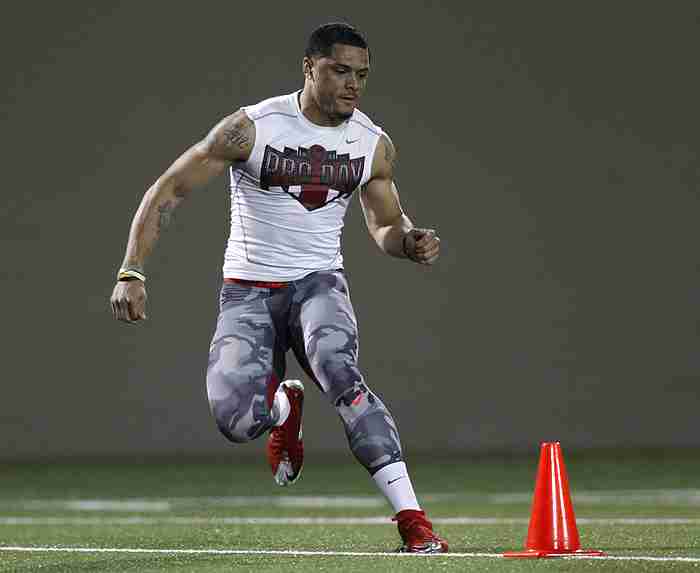 The team announced Friday night that Smith was being hospitalized overnight as a precaution after getting hurt earlier in the day while making an impressive catch.

Smith, a second-round draft pick out of Ohio State, caught a long pass from Geno Smith that deflected off the hands of cornerback Marcus Williams. While Devin Smith was coming down, he was hit from behind by safety Jaiquawn Jarrett _ and it appeared Smith’s head and neck area took the brunt of it.

With fans cheering the catch, Smith was slow to get up. He was eventually taken into the locker room by trainers.

Coach Todd Bowles had no update on Smith immediately after practice, the Jets’ second of training camp.

The speedy Smith was projected to be an immediate contributor for the Jets, and was working with starters Brandon Marshall and Eric Decker in three-receiver sets throughout practice Friday.

The 6-foot, 196-pound Devin Smith gave Geno Smith a potential gamebreaker to complement Marshall, Decker and Jeremy Kerley. He had 33 catches for 931 yards and a Big Ten-best 12 touchdowns during his senior season with the Buckeyes, leading the country with a school-record 28.2 yards per reception.

In other injuries, Bowles was hoping guard Willie Colon (knee) might be activated from the active/physically unable to perform list “in the next day or two.” He didn’t sound as optimistic about defensive lineman Kevin Vickerson, who’s dealing with a hamstring issue, and running back Stevan Ridley who is still working his way back from tearing the anterior cruciate and medial collateral ligaments in his right knee while with New England last season.

“He’s day-by-day or week-by-week, depending on how it feels,” Bowles said of Ridley.