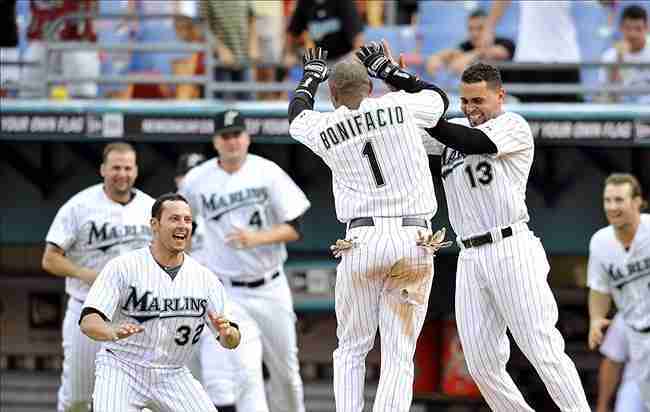 MIAMI (AP) _ The Cincinnati Reds made a mess of their final game before the All-Star break, and not just because of the ice scattered across the dugout floor after Johnny Cueto angrily sent a cooler flying.

Cueto threw a fit when he was pulled for a pinch hitter in the sixth inning, and things went downhill from there for the Reds, who endured a drubbing by the woeful Miami Marlins for the second day in a row Sunday, 8-1.

The Reds went 1 for 11 with runners in scoring position, committed two errors that led to three unearned runs and had another costly lapse when they failed to cover third base.

Afterward, manager Bryan Price held a 30-minute clubhouse meeting. His team lost three of four games in the series and was outscored 22-4 in the final two games.

“The last two games were disastrous,” Price said. “It was just not good baseball, and not the way we want to go into the All-Star break.”

Cueto (6-6) allowed five runs, three earned, and the Reds trailed 5-1 when he was pulled and threw his fit.

“It was not the right way to handle it,” Price said. “We’ve discussed that, and he knows that. It is not typical of Johnny by any means to have that type of reaction, and I certainly don’t condone it.”

“I feel bad,” the Dominican said through a translator. “You get frustrated; we’re all frustrated. But the manager is the manager, and the manager has a chance to do things like that, and that’s what he’s going to do.”

Both teams finished disappointing first halves. The Marlins (38-51) began the day with the second-worst record in the majors, while the Reds (39-47) were 151/2 games behind NL Central leader St. Louis.

“It hasn’t been a great first half, for a number of reasons,” Price said. “It would have been a lot better to play better those last two games. We have to rally. We have 70-plus games left on the schedule and we’ve got to play better and get after it.”

They struggled to cash in off Haren (7-5), stranding seven runners in scoring position against the right-hander, and threatening in all but one inning he worked.

“There were a lot of opportunities with runners in scoring position, probably too many,” Haren said. “But I was able to pitch out of them. I had them off balance a bit. I was definitely pleased with the end result.”

Reds All-Star third baseman Todd Frazier had two hits and an RBI but also made his 11th error, which allowed Miami to score two unearned runs. An errant throw home by shortstop Eugenio Suarez resulted in another unearned run as the Marlins blew the game open with three runs in the seventh.

Suarez compounded his mistake by failing to cover third, allowing a runner to advance an extra base and eventually score.

Justin Bour had three hits and three RBIs for the Marlins. Casey McGehee, signed Friday for a second stint with Miami, drove in two runs for the second game in a row.

Haren was pleasantly surprised by the run support.

“Against Cueto, I thought I was going to have to give up zero or one run to have a chance,” Haren said.

There’s speculation both Cueto and Haren will be on the market as the trade deadline approaches.

“I am still wearing my Cincinnati uniform,” Cueto said, “and that’s all I’m thinking about.”

Marlins: INF Martin Prado (shoulder) will return to Single-A Jupiter on a rehab assignment and is expected to be activated for the Marlins’ next game Friday at Philadelphia. He may fill in at 2B for All-Star Dee Gordon, who is expected to be sidelined at least a week with a dislocated left thumb, president of baseball operations Michael Hill said.