Knicks thinking big, looking for some size in free agency 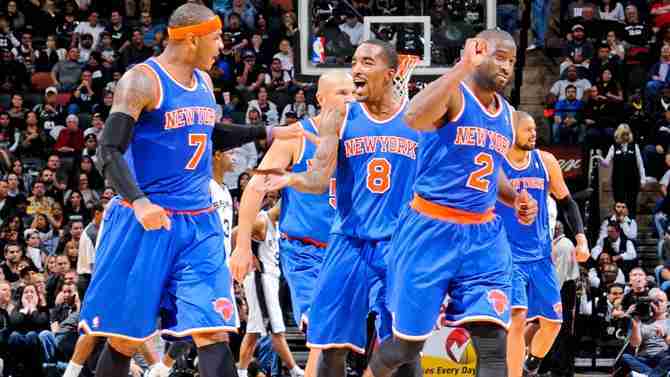 As in a big man, that is. The Knicks need plenty of help after their worst season ever, but they know where it needs to start.

“I don’t think it’s any secret we need to get some size up front. I think that’ll be a big focus for us,” Knicks coach Derek Fisher said.

Any hope of Karl-Anthony Towns or Jahlil Okafor was lost on draft lottery night, when the Knicks fell from the second spot to No. 4. Towns went first overall to Minnesota and Philadelphia grabbed Okafor one spot before the Knicks picked.

The Knicks got height in 19-year-old Kristaps Porzingis, but at only about 230 pounds on his 7-foot-3 frame, that’s not necessarily the kind of size they need.

Fisher said whether they drafted Porzingis or anyone else, they were looking for “a big that can help us defend, anchor our defense and do some things on our back line.”

“I just think having a veteran guy that has done that before and has a resume of being a guy that can help you up front defending, being physical, rebounding, I think that was a priority for us either way,” Fisher added last week after the Knicks introduced Porzingis and fellow rookie Jerian Grant.

There are big bodies available when free agency opens Wednesday, from former Defensive Players of the Year Marc Gasol of Memphis and Tyson Chandler of Dallas _ who the Knicks traded last summer _ to the Clippers’ DeAndre Jordan and Brooklyn’s Brook Lopez. At the power forward spot, Portland’s LaMarcus Aldridge, Detroit’s Greg Monroe and Indiana’s David West are among the possibilities.

Any would help a team that was last in scoring and near the bottom in shooting percentage and opposing field-goal percentage, too often unable to get into the paint on offense and keep opponents out of it on defense.

The Knicks will have close to $25 million to spend, enough to land a quality big and perhaps another player or two on the perimeter as they try to rebuild the team following a 17-65 finish.

“I say we have quite a bit of money sitting there in a positon in which we have the availability to use it. Whether it’s completely used and whether we have the opportunity to use it are still an unknown,” President of Basketball Operations Phil Jackson said.

“We have to go out and make the challenge and make the promise and make the hopes for somebody else to come here. So we have no idea. There are no promises in this particular free agent season, at least on our end.”

Even after adding two players in the draft, the Knicks still could have about half a roster to fill out, depending on who Jackson decides to bring back from last season. Getting two young pieces last week was a start, though even drafting well doesn’t usually produce quick jumps in the standings.

“Your team, in terms of really turning a new leaf, happens with those key guys that you get in free agency that really get you over the hump sooner and quicker,” Fisher said.