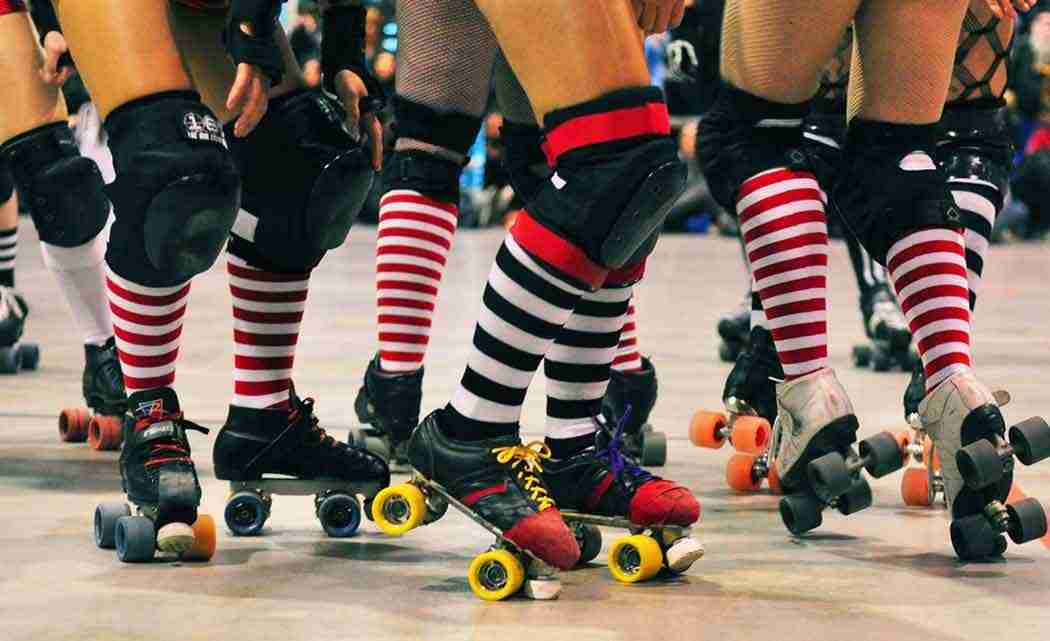 By TIANA KENNELL
The Shreveport Times

By night, Smart paints the mouth of a skull on her face, puts on protective gear and roller skates _ and then rams strangers into a crowd of cheering spectators.

She’s no longer the nice, sweet sensitive person that her friends describe, she is Vindictive Vixen _ captain of The Twin City Knockers flat track roller derby team in Shreveport-Bossier City.

“It’s your persona. It’s how you take off your role with the real world, whether it’s mother or teacher or a nurse or whatever and become an aggressive athlete,” said Sarah Lakey, an accounting professional and coach of The Knockers. “It’s like your super hero name.”

The Knockers team members are students, wives, mothers, nurses and office professionals. And as a unified team they are athletes, community leaders and role models to women of all ages.

The oldest member of the Knockers is a 54-year-old grandmother. The youngest is Madeline Farrar, a 22-year old sales associate at GNC who goes by Straddlin’ Madeline in the rink.

Roller derby began as a roller skating relay race in the 1920s, and in the `30s rules were implemented giving the skaters the goal of lapping the other skaters for points with blockers playing defense and offense.

It became a televised event in the 1960s, and that’s where the theatrics came in play. Popularity lessened in the `70s, but the most recent efforts to revitalize the sport came in the early 2000s by a group in Austin, Texas.

Some of the theatrics remain in today’s games with costumes, mascots, face painting, themed games and stylized posters.

The reason behind wanting to join the team varies from player to player. For many it’s a stress reliever at the end of a hard day, players said, but it is also a family unit and an outlet to give back to the community.

While roller derby is often associated with the theatrics and violence, it is a sport of strategy, skill and strength. Players must out-skate and out maneuver the opposing team players. It takes stamina to keep up and experience to deliver and take hits.

Becoming a Knocker is no easy feat. In order to play, members have to pass three rigorous tests. The first is based on endurance and the second on safety.

“There are tabs they have to accomplish before they can actually play a game,” Smart said. “We teach them how to fall, hit, take a hit, know where you’re allowed to hit.”

But just in case, an EMT is always on site at a bout.

“Roller derby is a combination of an athletics club and a sorority all rolled up into one,” Lakey said. “It’s not just that you get to push yourself into doing physical things and get stronger, you get to push your team mates and help them, and you get a family situation built in where everyone _ for the most part _ likes each other. And they do things outside of games and practices.”

The Knockers were founded in part to fill a deeper purpose in Shreveport-Bossier City.

“There aren’t that many organized sports for women in Shreveport area outside of springtime softball leagues,” Lakey said. “And there might be a few start-up sport teams that you can do for a season, but there’s nothing that fills that year round.”

The team also makes it a priority to give back to the community.

The Knockers is a nonprofit organization and partial proceeds from games are donated to a charity of their choice. The Council on Alcoholism and Drug Abuse will receive part of the proceeds from Saturday’s game.

The group has donated to and worked with other local nonprofits, including Shriners, Robinson’s Rescue, the VA, Chimp Haven, Providence House, Holly’s Hoppin’ Habitat and Angel Trees. And during the holidays, the team straps on the skates and helps the Salvation Army make baskets and gift packages that go out to children in the community.

The Knockers have become role models through their efforts, and in return members see an inner personal growth.

“I think the involvement in roller derby has helped me be a better compromiser and negotiator because you do have a lot of strong opinions and feelings,” Lakey said. “Especially when you’re in leadership roles and you have to work to keep everyone rolling nicely.”