Lots of study before camp ahead for Titans QB Marcus Mariota 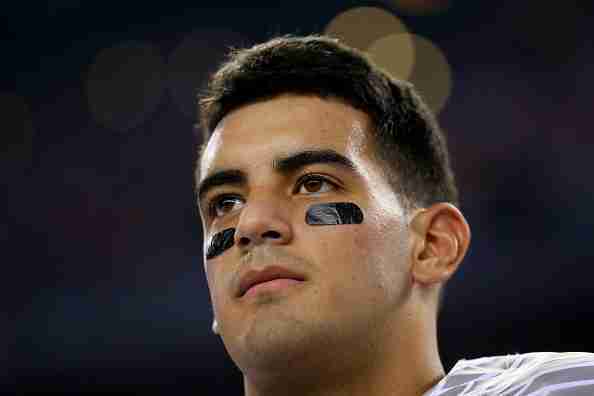 Still, the rookie is ready for a break.

Mariota wraps up his first NFL offseason Thursday with the final day of the Titans’ three-day minicamp and six weeks of work learning a new offense and new teammates. Crammed in that time was a trip to Los Angeles for a NFL Players Association rookie event in late May.

He now faces six weeks before the Titans report July 30 for training camp, and Mariota said Wednesday he plans to find a balance between studying and resting.

“Getting my head in the playbook, going over film over the past month or so of what we’ve been able to do and just kind of relaxing,” Mariota said Wednesday.

“It’s been a long six, seven months for me since I ended my college season and even leading up to that. So just relaxing and getting ready for training camp.”

Before Mariota reported to Tennessee as the No. 2 pick overall from Oregon, the Heisman Trophy winner had the grind of preparing for the NFL draft.

Mariota has been so busy he says he hasn’t planned a vacation yet, though when home is in Hawaii a trip back to the islands is likely.

The Titans have made it very clear they expect the rookie to start the season Sept. 13 when they visit Tampa Bay and Jameis Winston, who was the No. 1 pick in the draft.

So wherever Mariota goes, coach Ken Whisenhunt is confident the rookie still will be studying regularly and will be ready for training camp. The coach said Mariota has a good balance between family and work so that the break will not be an issue.

“He’s driven to be good from what I’ve seen,” Whisenhunt said. “He works really hard at the game whether it’s technique things, whether it’s studying. A lot of times with guys at that position that are really good I don’t care what you say to them, they’re always going to work on it, and that’s what you see in Marcus.”

Mariota’s last big break from football came last summer before his final year at Oregon where he racked up awards and victories. He threw for 4,454 yards and 42 touchdowns in 2014 while running for 770 yards and scoring 15 more TDs.

That’s the kind of production the Titans hope he brings to their offense after going 2-14 last season.

How the 6-foot-4, 219-pound quarterback adapts from the spread offense he played in college to throwing in the NFL remains to be seen. Whisenhunt and the Titans started working some spread plays Mariota ran well at Oregon into their playbook weeks before the draft.

Mariota started work May 11 in Tennessee, and Whisenhunt said they’ve worked Mariota as much as possible under the offseason rules. Mariota also will have his iPad filled with video of all his work this offseason to review as well.

“He’s done a nice job,” Whisenhunt said of the rookie. “You never know for sure what it’s going to be like, but he’s done very well. Obviously, we haven’t done anything in pads or with live rush yet, but as far as handling it, calling plays in the huddling, managing all those things, he’s doing a real nice job.”

Mariota will be taking part in the NFL’s rookie symposium starting Sunday.

Rookie wide receiver Dorial Green-Beckham has suggested Mariota could bring all the receivers to Hawaii to throw with before training camp, and the quarterback said with a laugh he’s not opposed to that.

Wide receiver Kendall Wright said the rookie has handled everything the Titans have thrown at him.

“He’s progressed very well,” Wright said. “He looks really good out there as far as throwing the ball and running the offense and taking control of the huddle. He looked like a pro. And I mean he doesn’t say much, but he’s done a really good job and he can only do better.”