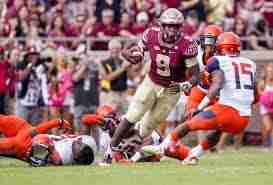 TALLAHASSEE  (AP) – No Everett Golson and Dalvin Cook ended up being no problem for Florida State.

The 17th-ranked Seminoles had one of their best offensive displays of the season despite missing their top two playmakers. Sean Maguire passed for 348 yards and three touchdowns while Jacques Patrick added three scores on 162 yards rushing in Saturday’s 45-21 win over Syracuse.

“Our offense is very explosive. When we’re executing and we’re on, there’s no stopping us. No matter who it is,” said wide receiver Travis Rudolph, who had five receptions for 191 yards and three touchdowns.

The 45 points tied a season high and the 575 yards of total offense was the second highest this year for Florida State, which improves to 7-1 overall and 5-1 in the ACC heading into next Saturday’s Atlantic Division showdown at No. 3 Clemson.

Maguire, who took most snaps with the first team leading into the game, said he found out Friday he was going to start. Florida State did not make the announcement until two hours before kickoff when it said Golson would be held out due to a concussion. Golson took a couple hard hits in last Saturday’s last-second 22-16 loss to Georgia Tech and was limited throughout the week.

In his second career start, Maguire completed 23 of 35 passes. He had 302 yards in the first half, which is the first time a Florida State quarterback had done that since Chris Weinke also had 302 against Clemson in 2000.

“I was thinking this offense needed to get back to the way Florida State used to play,” Maguire said. “The line and receivers did a great job. It was a good day for everyone to win and play good football.”

Syracuse coach Scott Shafer said that they had not done any advance work on Maguire, whose only previous start was last year against Clemson, when he threw for 304 yards and a touchdown in an overtime win. The Orange did know that Cook was being held out due to an ankle injury as coach Jimbo Fisher made that announcement on Thursday.

Patrick, who had three carries coming into the game, averaged 6.8 yards on 24 rushes. His longest run was a 28-yard touchdown in the fourth quarter that extended the Seminoles’ lead to 45-21.

It is the second straight season that a Florida State freshman has posted his first 100-yard game against Syracuse. Cook rushed for 122 yards in last season’s win.

“They gave us opportunities with the looks and Sean throws the deep ball very well, we ran good routes. We protected better up front,” Fisher said. “It’s been pretty good in practice. We had to get it into the game.”

After Syracuse took a 7-0 lead midway through the first quarter on quarterback Eric Dungey’s 1-yard touchdown run, Florida State took control by scoring on three consecutive drives. Rudolph tied the game with a 75-yard touchdown. He broke four tackles and gave a hard stiff arm on his way to the end zone after catching the ball at the Syracuse 31. Rudolph then gave the Seminoles the lead with a 45-yard catch in the end zone.

“I feel like that set the tone right there. We just got out there and we played comfortable,” Rudolph said of the first touchdown.

The Orange got within 21-14 on a Dungey 1-yard touchdown, but Ryan Norton mishit the ensuing kickoff.

The Seminoles, who had all three timeouts, took advantage as they got the ball on their own 42 and scored with nine seconds remaining in the half on a Patrick 1-yard run up the middle.

“It was a shame because I’d have felt really good about going in at halftime with some momentum and knowing that we were going to get the ball back in the third quarter,” Shafer said.

Dungey, who came into the game leading the ACC in passing efficiency, completed just 11 of 24 for 120 yards along with rushing for 46 yards on 10 carries.

After winning its first three games, Syracuse has dropped five straight and is 1-3 in the ACC.