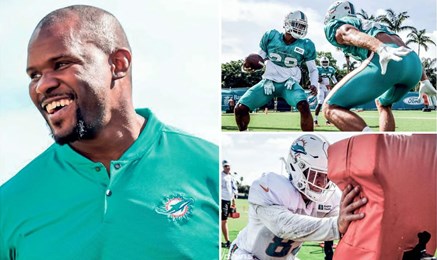 DAVIE, Fla. (AP) – The worst defense in the history of the Miami Dolphins will look different this year.

Until the ball is snapped, at least. The Dolphins allowed a franchise record 6,257 yards in 2018, which is one reason they have a new coach, Brian Flores. His defensive play-calling helped the New England Patriots to a 13-3 Super Bowl victory over the high-scoring Los Angeles Rams, and Flores has brought to Miami a scheme that redefines the meaning of positions.

“We’re all learning,” third-year end Charles Harris said. “I don’t think anybody has really ever played this kind of defense before. Everybody’s trying to get used to it.”

With the Patriots, Flores often had five or even six defensive backs, and the Dolphins could depart from the NFL norm even more.

Corners and safeties will switch spots. Safeties will play linebacker. Ends will drop into pass coverage.

In practice, the Dolphins have had up to eight defensive backs on the field at a time. With a defense that lacks star power, rotations may well involve up to 20 players.

“It really comes back to trying to put the right personnel groupings out there to match up with what the offense is doing, and try to maximize the skill set of our players,” first-time defensive coordinator Patrick Graham said. “If it’s five or 10 safeties, then that’s what it is.”

The Dolphins deployed a 4-3 defense last season under coach Adam Gase. The new staff is being coy about its plan to mix a 4-3 and 3-4.

Graham was defensive run game coordinator last year for the Green Bay Packers. He and Flores were on the Patriots’ staff together from 2009 to 2015.

“He knows defense,” Graham said. “We were raised the same in terms of how we think about the game. Everything aligns with our head coach _ being smart, being tough, being disciplined. That’s what we’re trying to make our defense. Before the scheme, that’s what we’re going to do.”

Jones, the team’s highest-paid player this year at $13 million, has been in a walking boot and the timetable for his return is uncertain. When healthy, he can double as a linebacker, as can McDonald. McCain was primarily a nickel back last season but has been moved to safety. Fitzpatrick, Miami’s first-round pick in 2018, played nickel back, boundary corner and safety as a rookie and will likely do so again.

Safeties coach Tony Oden, who is in his 16th season as an NFL assistant, said he has never coached a team where so much was so interchangeable.

In the line, the Dolphins are counting on a collective effort to overcome the offseason departures of four veteran ends _ William Hayes, Andre Branch, Robert Quinn and fivetime Pro Bowler Cameron Wake.

With those four the Dolphins had only 31 sacks last year, the fourth-lowest total in the league. The biggest issue for the defense this year will likely be finding ways to generate a pass rush.

Flores has been getting to know his new team for six months, and midway through the second week of training camp, he and his staff say they’re still figuring out who to play where.

The evaluation process will reach a new level with the first preseason game Thursday against the Atlanta Falcons.

“I think I know what guys do well, but I also know this _ when the lights go on and we start to play games, some guys just are gamers,” Flores said. “The games will tell us a lot.”

Next post FUNdraising Good Times: How to raise our children to become philanthropistsPart one of a two part series