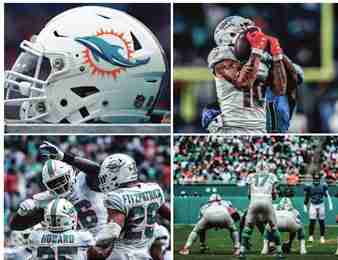 DAVIE, Fla. (AP) – The Miami Dolphins’ first game in 2017 was delayed a week due to a hurricane, so it was no big deal when they needed more than seven hours to play this year’s opener.

Miami showed a willingness to wait for a win, outlasting the Tennessee Titans 27-20 in a game that took longer to play than any since at least 1970. Months of preparation for the season didn’t include a plan on how to deal with a pair of weather delays lasting about two hours each.

“The coaching staff and players and staff – everybody does a good job of trying to figure out the solution,” coach Adam Gase said Monday.

They’ve had plenty of practice dealing with unusual challenges.

Last year the Dolphins lost quarterback Ryan Tannehill to a season-ending knee injury early in training camp. Hurricane Irma caused the postponement of the first game, forcing Miami to play 16 weeks in a row. Linebacker Lawrence Timmons went AWOL on the eve of the opener, and offensive line coach Chris Foerster resigned at midseason after a video appeared to show him snorting white powder.

In short, Gase has become accustomed to unexpected challenges.

“I won’t be surprised by anything,” he said. “I think we’ve almost covered everything.”

The biggest issue with Sunday’s delays, Gase said, was not knowing how long they would last.

“It’s dead time, and then you get a 10minute warning and you have to juice it back up,” he said.

That the Dolphins did, scoring 20 points in the final 22 minutes after the second delay. That included a 102-yard kickoff return by Jakeem Grant and a 75-yard touchdown pass from Tannehill to Kenny Stills, as well as a 54-yard interception return by Reshad Jones that helped seal the win.

“Wild game,” Tannehill tweeted Monday. “Part of me felt like we’d still be playing today. Glad to be a part of some history and get the year started with a win.”

Gase was especially unhappy about a third-quarter brawl after defensive tackle Jordan Phillips stood over injured Titans tackle Taylor Lewan and appeared to taunt him following Jones’ first interception. “The fight drives me nuts,” Gase said. “I’d rather our guys celebrate with the guy who just intercepted the ball, instead of doing what happened there. We’ll address it, we’ll handle it and we’ll make changes if we have to.”

Tannehill threw for 230 yards with two scores and two interceptions. It was his first game since a knee injury sidelined him 21 months ago.

“I reflected a little bit on the grind that it was to get back here,” Tannehill said. “I tried to stay in the present as much as I could.”

Brock Osweiler was unneeded as Tannehill’s backup. On game day Gase chose Osweiler for the No. 2 job over David Fales, who was inactive, but the pecking order could change.

“We’ll see how it goes going forward,” Gase said. “I like both those guys. That one is not an easy decision each week.”