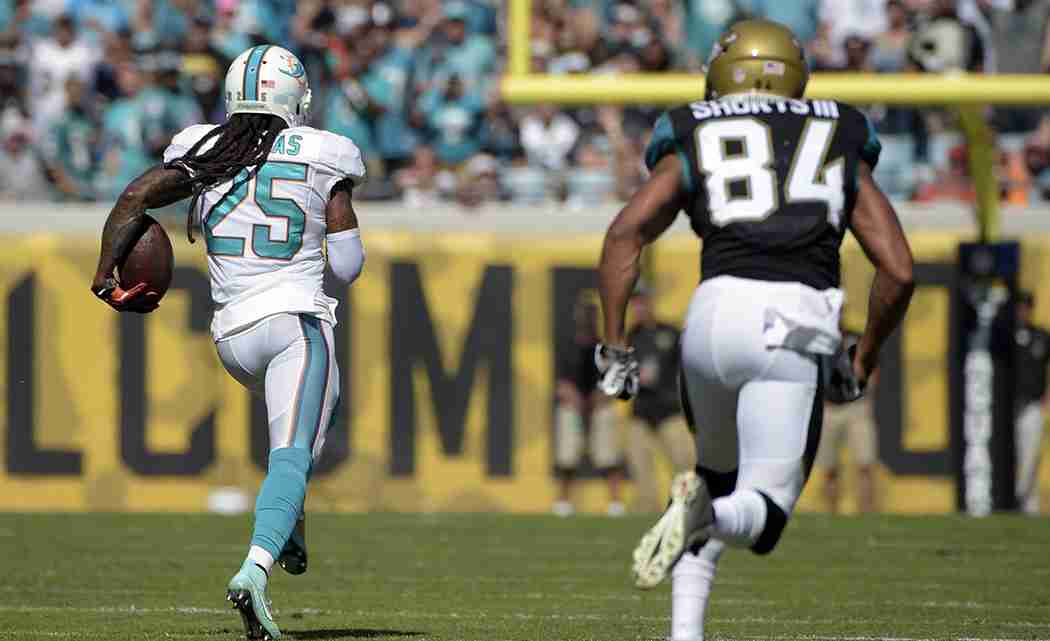 JACKSONVILLE, Fla. (AP) – The Miami Dolphins got away with a sluggish start against Jacksonville.

The Dolphins (4-3) overcame a lackluster performance by returning two interceptions for touchdowns and beat the Jaguars 27-13 on Sunday.

Louis Delmas returned one 81 yards for a score in the second quarter, and Brent Grimes added a 22-yarder in the third. That was all Miami needed to put away the Jaguars (1-7), who lost for the 19th time in 24 games under second-year coach Gus Bradley.

Miami’s win was far from perfect, but it gave the team consecutive victories for the first time this season and maybe a little momentum heading into a seemingly tough, four-game slate that features games against San Diego (5-3), Detroit (6-2) and Denver (6-1).

“We just have to start fast,” safety Reshad Jones said. “We can’t come out dry like we did. We have to be aggressive and throw the first punch and keep it going.”

The Dolphins were reeling against Jacksonville early.

The Jaguars dominated the first half, having outgained the Dolphins 199-4 late in the second quarter, but trailed 10-3 because of a slew of miscues. Rookie quarterback Blake Bortles was the main culprit. He had three turnovers, giving him six in the past two weeks and 13 in six games. Four of those have been interceptions returned for touchdowns.

“I’m killing us,” Bortles said. “I’ve got to try to eliminate different things and get better.”

He became the first quarterback since the New York Jets’ Geno Smith last year to have two picks returned for TDs in the same game.

“We have to come back and truly attack these things because we can’t continue in this fashion,” Jaguars coach Gus Bradley said.

Miami felt the same way after its first half.

Luckily for the Dolphins, Delmas and Grimes made huge plays. Delmas, who also recovered Bortles’ first-half fumble, stepped in front of Nic Jacobs and went untouched the other way for his second career touchdown and a 7-0 lead.

Grimes made it 17-3 early in the second half when he didn’t bite on Cecil Shorts’ double move, undercut the route and picked off Bortles’ throw.

“We didn’t perform up to our standards in any phase of the game offensively,” quarterback Ryan Tannehill said. “Defense played well. Defense made plays. I’m not happy about how we played offensively. It has to be better. We have to get this corrected.”

Aside from the big plays, here are five things to know about the game:

CENTURY TOPPER: Former Michigan star Denard Robinson ran 18 times for 108 yards, most of it early, and became the first Jacksonville player to top the century mark on the ground in consecutive weeks since Maurice Jones-Drew in 2011. Robinson got the majority of the carries, solidifying his spot as the starter over Toby Gerhart. “Denard is playing very well right now,” Bradley said.

INCONSISTENT FINS: Tannehill and Miami’s offense seemed mostly flat. Tannehill completed 16 of 29 passes for 196, with a touchdown and an interception. “There’s some good there, some room for improvement,” coach Joe Philbin said. “I didn’t think, offensively, we were in great rhythm throughout the entire day. We did some good things, but we have to be better.”

STOUT AGAIN: The Jaguars were solid again defensively – even without linebacker Paul Posluszny, cornerback Alan Ball and pass-rusher Andre Branch – and played well enough to win on that side of the ball for the fourth consecutive week. Jacksonville opened the game by forcing three consecutive three-and-outs and held Miami to 67 yards over its first six drives.

The Dolphins got a little going late and finished with 326 yards. But Bradley’s defense held the Dolphins to one touchdown and 13 points, and sacked Tannehill three times. The unit has given up three touchdowns and 45 points in the last four games, while allowing an average of 314 yards.

JORDAN RETURNS: Dolphins defensive end Dion Jordan, the third overall pick in the 2013 draft, made his season debut Sunday and was on the field for the opening series. He finished with two tackles. Jordan was suspended the first six games of multiple violations of the NFL’s substance-abuse policy.

Next post THE SUV GOES FROM ALL-AMERICAN TO GLOBAL STAR