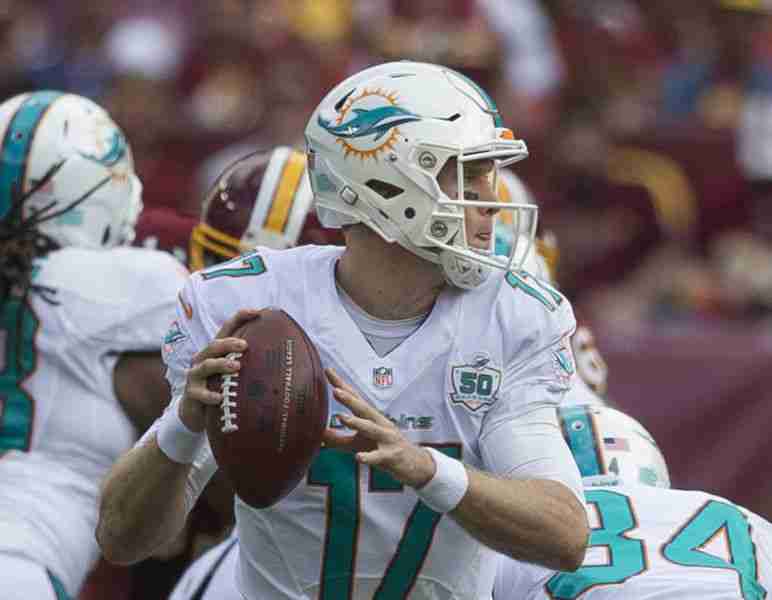 MIAMI GARDENS, Fla. (AP) – When the Miami Dolphins made a goal-line tackle on the final play to seal their latest victory, quarterback Ryan Tannehill sprinted onto the field, leaped to chest-bump a teammate and then sprawled happily to the turf.

Pardon Tannehill if the Dolphins’ winning streak has left him a little bit giddy. They made it six in a row by beating San Francisco 31-24 Sunday.

“It is exciting to be where we’re at,” Tannehill said. “Obviously you want to be playing meaningful games in December to get yourself playing in January and February, and we’ve done that.”

The Dolphins (7-4) are in the thick of the AFC wild-card race and building momentum in pursuit of their first playoff berth in eight years. A victory next Sunday at Baltimore would extend the winning streak to seven games, their longest since 1985.

The Dolphins’ record is their best after 11 games since 2003. They’ve won four consecutive home games in the same season for the first time since 2002.

“They all hurt,” receiver Jeremy Kerley said. “To get that close and come up short, you just think back on all the things you could have done better.”

Here are some things to know about two teams who continue to head in opposite directions:

TANNEHILL TIME: Miami was missing three starters on the offensive line. With the ground game stymied, Tannehill beat the 49ers through the air.

He went 20 for 30 for 285 yards and three touchdowns, ran for 34 yards and committed no turnovers. His quarterback rating of 130.6 matched the second-highest of his career.

“We find a way to win,” Tannehill said. “That’s the kind of team you want to have.”

During the winning streak, Tannehill has completed 68 percent of his passes with nine touchdown passes and one interception for a quarterback rating of 104.7.

TURNOVERS: San Francisco lost a fumble at the Miami 16, and had a deflected pass intercepted to give the Dolphins the ball at the 49ers 26.

“When you lose the turnover battle, you’re not going to win,” San Francisco coach Chip Kelly said. “We had two critical turnovers.”

Miami’s Kiko Alonso came away with the ball both times. He’s the first Dolphins linebacker since at least 1993 to recover a fumble and intercept a pass in the same game.

Alonzo – the recipient of Tannehill’s postgame chest bump – also led Miami with 12 tackles, and sandwiched Colin Kaepernick at the 2-yard line on the final play.

“People are going to say I had a big day,” Alonso said. “I just happened to be in the right place at the right time.”

UP NEXT: The Dolphins on Sunday visit the Baltimore Ravens (6-5), who are tied for the AFC North lead. The 49ers visit the Chicago Bears (2-9) on Sunday after spending the week practicing in Orlando, Florida.

Next post Elementary school principal reaches out to Polk families