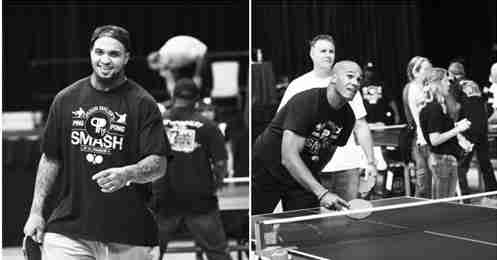 HOLLYWOOD – The only thing better than an epic table-tennis battle between two football giants is the rematch! On Monday, November 7, Jason Taylor, the legendary Miami Dolphins defender, and Mike Pouncey, the Dolphins current Pro Bowl center, will renew their rivalry during the CHG Healthcare JT’s Ping-Pong Smash 13 at Hard Rock Live in Hollywood. Presented by Publix, proceeds from the event will benefit the Jason Taylor Foundation, whose mission is to support and create programs that facilitate the personal growth and empowerment of South Florida’s children in need by focusing on improved health care, education and quality of life. This year’s Smash will also support the Team Pouncey Foundation.

“Mike is such a great guy and we are thrilled to be partnering with him again this year,” said Taylor. “He’s not much of a ping- pong player, but he’s one of the best offensive lineman in all of football and more importantly, a real leader in this community.” “JT has always been a guy who I’ve looked up to, other than for his ping-pong skills, of course,” said Pouncey. “So partnering with him on this event was a blast last year and we’re looking forward to having even more fun, and helping even more kids, this year.”

This one-of-a-kind event will once again pair generous community members with some of the Sunshine State’s most recognizable personalities from the worlds of sports and entertainment, including Taylor and Pouncey, as well as a host of current and former Miami Dolphins players, cheerleaders and others. The duos will compete in a round-robin style ping-pong tournament while raising money for local children’s charities. The fun-filled atmosphere will also feature Kimmy B from the Hits 97.3 DJ Laz Morning Show, as well as Power Parties DJs & Lighting filling the arena with today’s hottest music. There will also be a Best Buy Fun Zone, where those in attendance can enjoy a Best Buy gaming station, haircuts, interactive games and more!

Prior to the action that evening, the Jason Taylor Foundation will hold the ninth-annual Ping-Pong Smash Kids Clinic supported by UPS. Nearly 100 deserving children will have the opportunity to learn the fundamentals of the world’s fastest sport from former Puerto Rican Junior National Table Tennis Champion and three-time JT’s Ping-Pong Smash Champion, Juan Ly. The Kids Clinic will take place from 3-5 p.m. at Hard Rock Live.

Following the event, participants will attend the Hooters Champions’ Celebration to take part in the awards ceremony, a silent auction and loads of fun!

Doors open for the CHG Healthcare JT’s Ping-Pong Smash 13 at 5:30 p.m. on Monday, November 7. Admission to the event is a $5 donation to the Jason Taylor Foundation. For more information, call 954-424-0799, visit www.jasontaylorfoundation.org, or follow the foundation on Twitter or Instagram at @JTFoundation99.

Next post Palm Beach residents to vote on sales tax