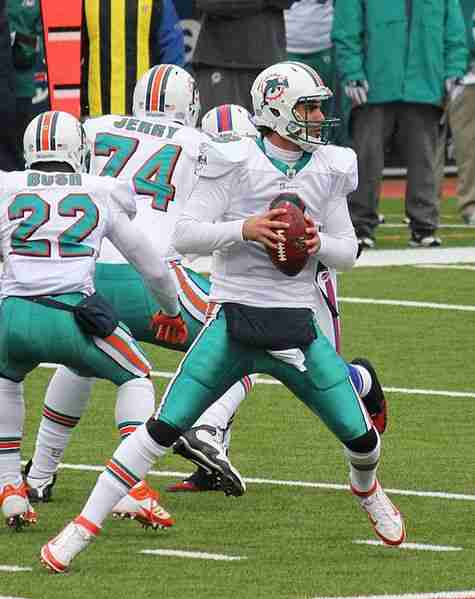 MIAMI GARDENS, Fla. (AP) – Idle for most of the past five seasons, backup quarterback Matt Moore came through on the final series Sunday for the Miami Dolphins.

And his work is just beginning.

With Ryan Tannehill sidelined by a knee injury that will likely end his season, the Dolphins turned to Moore, who directed the drive that led to a field goal on the final play to beat the Arizona Cardinals 26-23.

On Saturday at the New York Jets, Moore will likely make his first start since 2011, the year before Tannehill was drafted. And the Dolphins (8-5) will be in the thick of the race for their first playoff berth in eight years.

The Cardinals (5-7-1) are almost certain to spend the postseason at home after another ugly road loss.

Here are things to know about both teams:

SUPER SUB: Moore made 12 starts for the Dolphins in 2011, but has thrown only 35 passes since then, with Tannehill starting every game the past five years.

That’s about to change. Tannehill limped off with a left knee injury in the third quarter after he was hit around the legs by defensive tackle Calais Campbell, and the Dolphins fear their quarterback tore his ACL. He’ll undergo further testing Monday.

Miami failed to pick up a first down in Moore’s first three series, but he threw completions of 12 and 29 yards to Kenny Stills in the last minute to set up Andrew Franks’ game-winning 21-yard field goal.

“When Matt came in, he brought energy and enthusiasm,” tackle Ja’Wuan James said. “He’s a leader. We’re confident in Matt.”

PLAYOFF RACE: Miami pulled into a tie with Denver in the race for the final AFC wild-card spot. The Broncos lost to Tennessee 13-10.

The Dolphins finish the regular season with games against their three AFC East rivals.

“You talk about where we’re at as a team, you can’t ask for much more,” Moore said. “The ball is in our court.”

Arizona, 1-5 in away games, will try to bounce back against New Orleans at home Sunday.

“This was pretty much a playoff game for us, and we knew we needed the W real bad,” Campbell said.

RUNNING DOWN THE CLOCK: With 10 seconds left, the Dolphins narrowly averted disaster while running one final play before the field goal.

Moore briefly bobbled the snap and a teammate stepped on his foot, which caused a sloppy handoff to Darien Williams.

Several seconds ticked off while Williams became entangled in a scrum, and there was only a second remaining when the Dolphins managed to call time out.

“Not the way you wanted that series to end,” Moore said.

“I thought it was very questionable whether that second was on that clock,” Cardinals coach Bruce Arians said. “Thank God the home teams do not run the clock, the NFL does, or you’d really have a (controversy).”

PIVOTAL PLAY: After the Cardinals scored a touchdown to cut their deficit to 21-15, Jordan Phillips blocked Chandler Catanzaro’s extra-point kick, and Walt Aikens scooped up the ball and scored .

“I saw the ball, picked it up and the rest was history,” Aikens said. “I was tired. It’s a long run for 2 points.”

The three-point swing turned out to be the difference in the game.

CONTAINED: The Cardinals’ David Johnson came into the game leading the NFL with 15 touchdowns, but was kept out of the end zone. He rushed for 80 yards and caught passes for 41.

“Defenses are keying in on me a little bit more – double-teaming me, putting their safety or DB on me,” Johnson said. “So I really do have to focus more on attention to detail.”