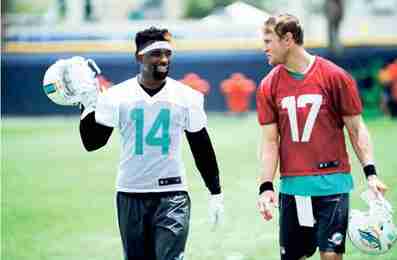 MIAMI GARDENS – As the Miami Dolphins trudged to the locker room after a 35-14 thumping by New England, fans stood and cheered the home team, losers Sunday but playoff-bound for the first time since 2008.

The crowd was looking at the big picture, and the Dolphins were, too. Miami (10-6) clinched an AFC wild-card berth a week ago and will play next weekend at Pittsburgh.

“All you want is the opportunity,” guard Jermon Bushrod said. “You know where we want to go, and we’ve got an opportunity.” Still to be determined is whether quarterback Ryan Tannehill might contribute to any playoff push. He missed the final three regular-season games with a sprained left knee, and Matt Moore has gone 2-1 as a replacement.

Coach Adam Gase was noncommittal about any timetable for Tannehill’s return. “I don’t even know where he’s at right now,” Gase said. “I’m going to make the call on it. If I don’t feel comfortable with it, then Matt will stay the starting quarterback. I need to get a lot of information. I have to see him practice, and I have to see him move around, and I have to feel really good about it. I’m not going to jeopardize his career.”

Moore went 24 for 34 for 205 yards and two scores and an interception against the Patriots, and has eight touchdown passes in his three starts.

“He has done a great job,” Gase said. “He has protected the ball and has operated the offense very well and has led those guys. We just have to build on what we’ve done in the last 31/2 games with him.”

If Moore starts next weekend, it will be his first playoff game. His only other post- season season experience was as an inactive backup for the Carolina Panthers in 2008.

And harder to win there. The Dolphins are bidding for their first playoff victory since 2000.

Their game at AFC North champion Pittsburgh will be a rematch. Miami won at home in Week 6 against the Steelers, 30-15.

“We beat them here in the heat,” Bushrod said. “Now we’ve got to go up there and beat them in the cold.”

The win over the Steelers in October helped the Dolphins turn their season around after a 1-4 start.

If the Dolphins win, they’ll face New England again. The Patriots swept the regular- season series between AFC East rivals for the first time since 2012.

The Dolphins are in the playoffs even though they have been outgained by 798 yards and outscored by 17 points this season. But in games decided by a touchdown or less, they’ve won nine in a row, despite a slew of injuries.

Gase’s players sounded confident of their chances against the Steelers.

“They’re a great team,” receiver Jarvis Landry said. “So are we.”