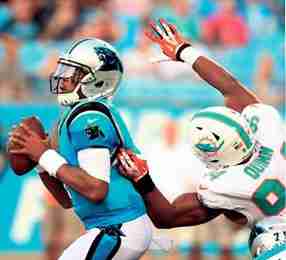 The preseason says otherwise. Miami has allowed 299 yards rushing in the first two exhibition games. That includes 226 yards Friday at Carolina, and 71 on one play – a touchdown run by Christian McCaffrey on the second snap of the night.

The leaky ground defense is especially worrisome because the same problem contributed greatly to a 6-10 finish in 2017. The Dolphins gave up over 170 yards rushing three times during a five-game losing streak that sent the season south.

Despite evidence to the contrary, Gase says his run defense is improved.

“I can see how it’s starting to come together,” he said Sunday.

“Clean up some of the mistakes, and we’ll be all right,” middle linebacker Raekwon McMillan said.

The front seven is still adjusting to the loss of five-time Pro Bowl tackle Ndamukong Suh, who was cut when his enormous contract became too burdensome. Last week the Dolphins signaled they’re struggling to replace Suh when they signed veteran Kendall Langford, who had been out of the NFL since early November.

Langford was rushed into action at Carolina. He played 18 snaps, made no assignment mistakes and is in excellent shape, Gase said.

The defensive lineman making the biggest impact so far is former Pro Bowl end Robert Quinn, an offseason acquisition who had two sacks at Carolina. He had 19 sacks with the Rams in 2013.

“Hopefully I can get back to those good numbers,” Quinn said. “That’s kind of my mindset – to break records and do something extreme.”

Overall, Gase said, the remaking of the front four is on schedule.

“I like where our d-line is,” the coach said. “We’ve just got to make sure we do a better job of fitting the runs right, but they’re attacking.”

There are fresh faces at linebacker, too, and both are youngsters from Ohio State. McMillan is starting in the middle after missing all of his rookie season in 2017 because of a knee injury. Rookie Jerome Baker, a third-round pick, is the front-runner to start on the outside opposite veteran Kiko Alonso.

McMillan and Baker are two big reasons Gase remains optimistic about the direction of the run defense.

“We’ll get those guys up to speed,” Gase said. “They’ll be doing it right once we hit the first week. We have athletic guys in that second level. We’ll give them opportunities to make plays, and they’ll make them.”

McMillan and Baker were nowhere to be found on McCaffrey’s long run, however, and defensive backs Bobby McCain and T.J. McDonald took bad angles.

“We had two guys get too aggressive in the secondary,” Gase said.

Such mistakes are correctable, the coach said. He has less than three weeks to fix them.