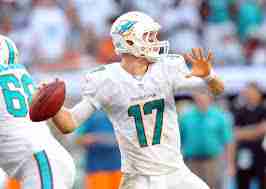 MIAMI GARDENS, Fla. – When the Miami Dolphins scored on their opening possession for the second week in a row, Ryan Tannehill raised his index finger and sprinted down the field more than 50 yards to join the end zone celebration.

From there, Tannehill just kept going. He threw for four scores in the first 16 minutes and completed his first 18 passes to break an NFL record and help the Dolphins beat the hapless Houston Texans 44-26 Sunday.

The Dolphins led 41-0 at halftime en route to their highest-scoring game since 2002. Tannehill finished with a perfect passer rating of 158.3.

“That was a unique game,” he said. “It was a game that I’ve never been a part of, especially starting like that. We had a lot of fun.”

Here are things to know about the Dolphins’ second rout in two games under interim coach Dan Campbell.

“We really need this win,” Campbell said. “We’re capable of beating this team. They’re not going to be easy. They never are. You’ve got Tom Brady, you’ve got the great Bill Belichick. We have to be on cue with how we’re going to attack this team, and it’s all mental work for the next three days.”

The Texans (2-5) have lost three of their past four games while giving up 139 points during that stretch. They’re at home Sunday against Tennessee.

Tannehill went 18 for 19 for 282 yards, and became the first quarterback to throw three touchdown passes of 50-plus yards in a first half since Randall Cunningham in 1998, according to STATS. His scoring passes covered 53 yards to Rishard Matthews, 50 yards to Jarvis Landry, 10 yards to Landry and 54 yards to Lamar Miller.

Tannehill extended his two-game streak to 25 consecutive completions, an NFL record, before he threw his only incompletion in the fourth quarter. Miami became the first team in at least 75 years to score four offensive touchdowns of at least 50 yards in a half, according to STATS.

Given the result, it’s easy to see why Houston quarterback Ryan Mallett wasn’t that excited about the trip.

Mallett, who lost the starting job two weeks ago to Brian Hoyer, missed the team plane and had to fly to Florida on his own. He blamed traffic for missing the team flight.

“You’ve got to be on time,” Mallett said. “That’s not the leadership role I need to exhibit. I need to be better.”

Hoyer played the entire game and went 23 for 49 for 273 yards and three touchdowns. But he was sacked four times and had a deflected pass intercepted and returned for a score.

To compound the Texans’ misery, running back Arian Foster hobbled off the field late in the game with an Achilles tendon injury that might end his season.

Foster was hurt without being hit during garbage time. The four-time Pro Bowl running back was in motion and crumpled to the turf as the ball was snapped.

“I feel terrible for him,” coach Bill O’Brien said. “He’s done a lot for us in the two years I’ve been here. I hate that part of the game.”

Ndamukong Suh had his first two sacks since signing a $114 million, six-year contract with Miami. He also had three tackles for a loss, two passes defended and six tackles.