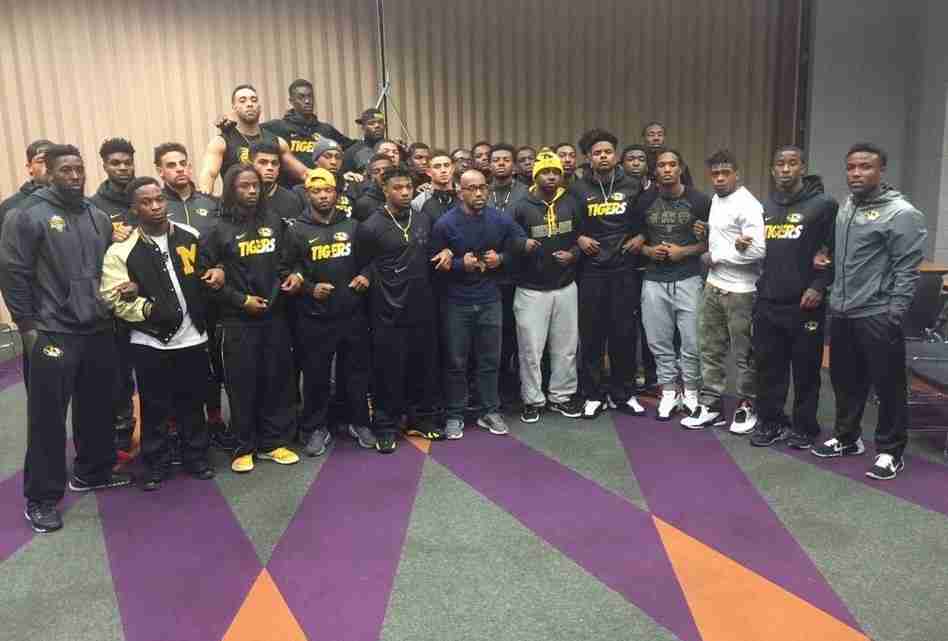 COLUMBIA, Mo. (AP) -Missouri football players announced Saturday night on Twitter that they will not participate in team activities until the university president is removed from office.

The statement from the athletes of color was tweeted out Saturday by several members of the football team, including starting running back Russell Hansbrough.

The move aligns the team with campus groups who have been protesting the way university president Tim Wolfe has dealt with issues of racial harassment during the school year. Jonathan Butler, a black graduate student, is in the sixth day of a hunger strike to call attention to the issue.

The statement from the players included a photograph of 32 black men, including Butler. In the photo, two players have their arms linked through his.

The message reads: “The athletes of color on the University of Missouri football team truly believe “Injustice Anywhere is a threat to Justice Everywhere” We will no longer participate in any football related activities until President Tim Wolfe resigns or is removed due to his negligence toward marginalized students’ experience. WE ARE UNITED!!!!!”

Wolfe met with Butler and student groups on Friday to discuss the university’s handling of racial harassment cases.

Butler also has expressed concern about other student issues, including the removal of graduate student health care subsidies and an end to university contracts with a Planned Parenthood clinic.

Student groups have been critical over how Wolfe has handled issues of race and discrimination, and blocked his car at homecoming in an attempt to speak with him. They have complained that the use of racial slurs is prevalent. In April, a swastika was found in a Missouri dormitory, and officials said last month they were investigating another act of vandalism that targeted minorities.

In a text message statement to The Associated Press, the Missouri athletic department said it was aware of the statement by “many of our student-athletes.”

“We all must come together with leaders from across our campus to tackle these challenging issues and we support our student-athletes right to do so.”

The campus is about 120 miles west of Ferguson, the St. Louis suburb where tensions erupted following the police shooting death of 18-year Michael Brown. Brown, who was black, was unarmed when he was shot by a white police officer during a confrontation in a street in August 2014. His death sparked ongoing protests and helped spawn the national “Black Lives Matter” movement rebuking police treatment of minorities.

The campus of 35,448 is mostly white. Approximately 17 percent of the student population identifies with a minority group, according to the university website.

Missouri last played Thursday night at home, losing to Mississippi State to fall to 4-5 on the season. The Tigers have three more games left, including next Saturday at home against BYU.