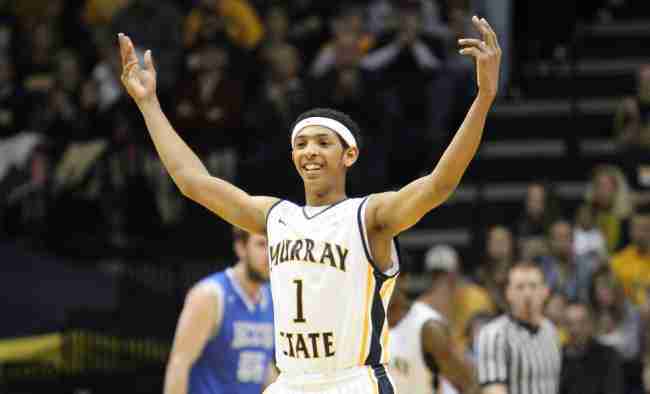 By MURRAY EVANS
OKLAHOMA CITY (AP) _ In an NBA draft full of stars from the likes of Kentucky, Duke and Wisconsin, Cameron Payne’s pedigree enticed the Oklahoma City Thunder.

Payne drew little interest out of high school in Memphis, Tenn. He then starred at Murray State in the Ohio Valley Conference _ a school and league not accustomed to national attention.

In part because of that background, Payne joins the Thunder without a sense of entitlement, Oklahoma City general manager Sam Presti said.

And that’s a good thing since the 6-foot-2 Payne clearly will be the No. 3 point guard on a loaded roster behind All-Star Russell Westbrook and veteran D.J. Augustin.

“It fits me perfectly,” Payne said Saturday during his introductory news conference. “Coming from a small school, I’m going into a great situation.”

Last season, he averaged 20.2 points, 6 assists and 1.9 steals in leading Murray State to a 29-6 record, a 25-game winning streak and an OVC regular-season championship. He received honorable mention on The Associated Press All-America list.

“The fact that he’s enjoyed a rapid ascent and it hasn’t changed him at all, we think that’s an incredibly attractive piece to this player,” Presti said.

Presti cited similarities between Murray State’s place in Murray, Kentucky _ with a population of about 18,000 _ and the Thunder’s place in Oklahoma City, one of the NBA’s smallest markets. He said Payne spent an extra 11/2 days in Oklahoma City after his pre-draft workout.

“We talked a lot about the role of the Thunder and the role it plays in the city and the state,” Presti said. “I think it really resonated with him because he’s coming from a school at Murray State where the basketball program carries a larger cause as well. We had great conversations about it and the concept was really natural with him. That was really encouraging for us.”

Payne understands some might question the level of competition he faced in college, but noted plenty of mid-major stars have thrived in the NBA _ MVP Stephan Curry of the Golden State Warriors, a former Davidson standout, and 2013 rookie of the year Damian Lillard of the Portland Trail Blazers, a Weber State product.

“Those guys set the tone for a lot of mid-major players,” Payne said. “If you look at all those guys, they trusted the process and they’re big-time names in the NBA.”

Payne said he looks forward to learning from Westbrook, Augustin and 2014 NBA MVP Kevin Durant. He’d also like to pick up some tips on the art of the mid-range jumper from Westbrook.

New Thunder coach Billy Donovan said there was no bitterness in Payne’s voice when the two discussed the lack of recruiting interest in Payne two years ago.

Donovan, who coached the past 19 years at Florida, also is familiar with the Thunder’s second-round draft choice, 7-foot center Dakari Johnson of Kentucky.

“Dakari is somebody who, still being young, still has a chance to grow and develop and get better,” Donovan said. “I think a frontcourt player of his ability offensively, as he continues to grow on the defensive end, I think he’s got a very, very bright future.”