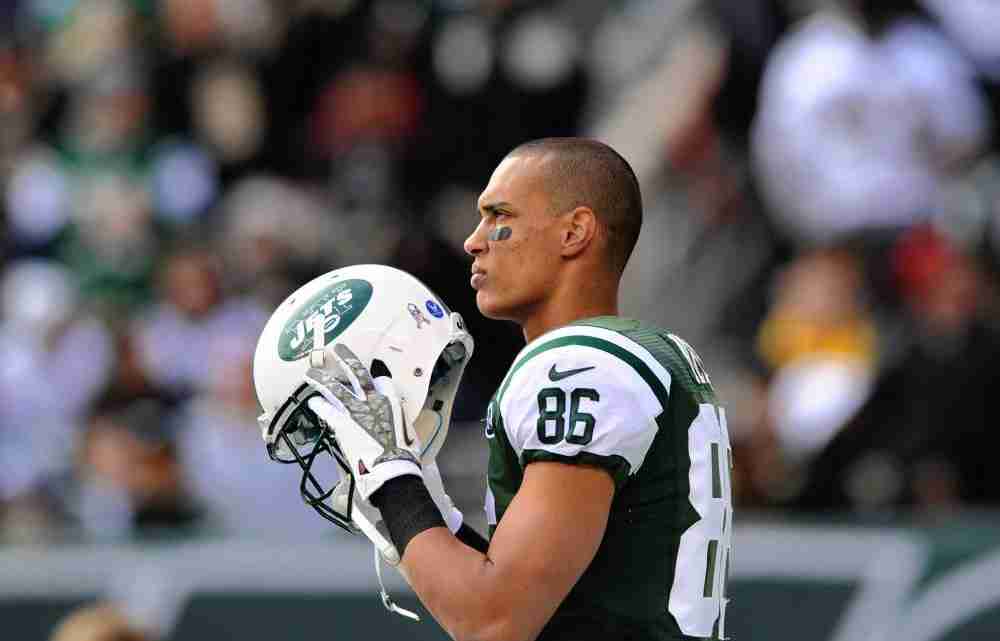 The NFL wide receiver, who’s currently a free agent, believes he is being forced to choose between his football career and his life’s mission.

“I’m at a crossroads,” Nelson wrote in a blog Friday on the website for his nonprofit organization, I’mME. “While I’m grateful for the opportunities the NFL has given me over the years, I’m confused by what I’ve recently been given: an ultimatum.”

The 28-year-old Nelson has 138 career receptions and 10 touchdowns in five NFL seasons. He spent his first three years with Buffalo, and was in camp with Cleveland in 2013 before being signed by the New York Jets. Nelson was cut by New York last October after the Jets traded for Percy Harvin, and hasn’t hooked on with another team since.

“If given an ultimatum, I choose i’mME,” Nelson wrote. “But that doesn’t mean it’s my No. 1 priority and that football is a side project I do for fun. The NFL can _ and will _ do whatever it wants, but I ask this: What if it was possible to do both, and more importantly, do both really well? If that were the case, what would locker rooms look like? What would this world look like?”

After a humbling and emotional trip to Haiti in 2012, Nelson and his brothers Daniel and Patrick started i’mME, a nonprofit organization aimed at ending the orphan cycle in that country. Nelson, a Texas native who went to the University of Florida, has since made numerous trips back, and the organization’s impact has grown immensely, with a goal of building several homes to house and care for orphans in Haiti.

“I realized I had the opportunity to live out both of my passions,” Nelson wrote. “It was a beautiful era of my life. I played my heart out on the field and lived with the Haitians in the offseason. I was whole. Last fall, however, I was released from the Jets and became a free agent. Since my release, there’s been hesitation to sign me to a contract, due largely to how I spend my free time, even though it’s made me stronger: physically, mentally, emotionally.”

Nelson says he has not heard from any NFL coach or executive that they think he can’t play in the league anymore. There are other factors, he believes, involved.

“Instead, I’m hearing questions about my commitment because I’m outspoken about my nonprofit, and I do a lot to make it successful,” he said. “Rather than posting pictures of me at the gym (which I go to every day), I choose to use my social media and interview opportunities to showcase our organization’s amazing work.”

“They don’t think my head’s in the game, but it’s all guesswork.”

Nelson wrote that he respects that NFL coaches and owners have the right to make their own decisions and no one owes him anything, but “perception isn’t always reality, and that’s the case here.” He insists he can balance his life on and off the field.

“It’s hard for me, knowing I’ve given so much of myself to this game, having worked so hard to always do the right thing _ and now I’m being stripped of a future because it’s not their way, the normal way,” Nelson wrote. “They know I play ball and run a nonprofit, and they just assume it’s impossible to do both.”