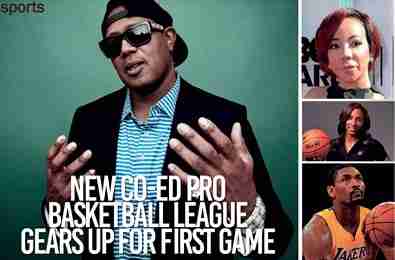 NATIONWIDE – Last month, it was announced that Percy “Master P” Miller would be the president of the new Global Mixed Gender Basketball (GMGB) League and owner of his hometown’s New Orleans Gators team.

Now the league has announced the hip hop mogul has added some major talent to the Gators’ roster including: Metta World Peace formerly known as Ron Artest, and the Louisiana Connection, all former LSU Tigers and ex-NBA stars with plenty more pro-basketball left in their game: Glen Davis, 6’9, Stromile Swift, 6’10 and Tyrus Thomas, 6’11.

The GMGB league is the first co-ed basketball league, where men and women will be teammates and face off against each other. Its tagline is “The League Where Pro Male & Female Ballers Meet & New Stars Are Discovered.” Master P said the league is about equality.

“We play at a higher level on the basketball court but we are all about helping the community, giving back and equal play and equal pay for women. That’s what makes us different,” Master P said.

He’s even had Baden Sports design a 29 inch basketball to level the playing field in the league.

“Our league is about equality; we couldn’t have the standard ball for the NBA or the one used for the WNBA,” Master P said. “If we are going to stand by our equal play, that also includes the basketball for the players to use.”

Thus far, the league has five teams including: Master P’s Gators, the Atlanta Heirs (owned by Tameka “Tiny” Harris), the Washington Fusion, the Chicago Vikings and the Miami Ballers.

“It gets no bigger than Dominique Wilkins when you are talking about Atlanta basketball. He is a legend, he’s one of the best professional basketball players to come out of Atlanta, and he’s well respected in the community and all over the world.

I am honored to have him as our head coach,” Tiny said.

“Coach Leslie’s expertise, history and knowledge of the game will create a championship atmosphere for our team. We are excited and blessed to have her join our family, The New Orleans Gators,” Master P said. “GMGB is a professional co-ed basketball league and Lisa Leslie is no stranger to playing against guys earlier in her career. She started off playing guys from the streets to the pros.

I had a chance to experience her hard work and competitiveness first-hand. I played her during the summer of my pro career. She’s smart, she knows basketball and she’s a beast on the court. That’s the kind of spirit we need in our Gators organization.”

The two teams (Atlanta and New Orleans) will face off in the league’s first exhibition game September 23 in Las Vegas and pay tribute to the victims of Hurricane Harvey.

“I’m proud to be the coach, the face of this team and organization. I love that this league stands for equality and giving back.

(I) can’t wait until September 23rd so the world can witness history as we put some of the best pro co-ed talent on the same court at one time in Las Vegas,” Leslie said.

For more information and updates on the GMGB, visit www.globalmixedgenderbasketball.com.