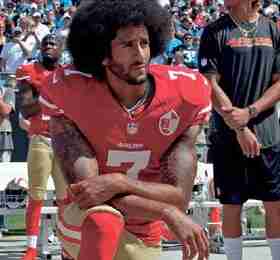 ATLANTA – NFL owners approved a new policy Thursday aimed at addressing the firestorm over national anthem protests, permitting players to stay in the locker room during the “The Star-Spangled Banner” but requiring them to stand if they come to the field.

Commissioner Roger Goodell said the change was approved unanimously by the owners at their spring meeting in Atlanta, but it was met with immediate skepticism by the players’ union.

We’ve been very sensitive on making sure that we give players choices, but we do believe that moment is an important moment and one that we are going to focus on.”

In a sign that players were not part of the discussions, any violations of the policy would result in fines against the team — not the players.

The NFL Players Association said it will challenge any part of the new policy that violates the collective bargaining agreement. The owners spent several hours addressing the contentious issue — which has reached all the way to the White House.

Former San Francisco 49ers quarterback Colin Kaepernick began kneeling during the national anthem in 2016, a quiet but powerful protest against police brutality and racial inequities in the justice system.

Other players took up the cause, and the gesture carried on during the 2017 season even after Kaepernick left the 49ers and failed to land a job with another team.

President Trump turned the anthem protests into a campaign issue, saying the NFL should fire any player who takes a knee during “The Star-Spangled Banner.” The NFL hasn’t gone that far, but Kaepernick has yet to land another job and one of his former teammates and fellow protesters, safety Eric Reid, is also out of work.

Both have filed collusion grievances against the NFL. While the owners touted the change as a compromise and noted it was approved unanimously, the players’ union made it clear it was not part of the discussions.

“The NFL chose to not consult the union in the development of this new ‘policy,’” the NFLPA said in a statement. “NFL players have shown their patriotism through their social activism, their community service, in support of our military and law enforcement and yes, through their protests to raise awareness about the issues they care about.”

The statement added, “The vote by NFL club CEOs today contradicts the statements made to our player leadership by Commissioner Roger Goodell and the Chairman of the NFL’s Management Council John Mara (co-owner of the New York Giants) about the principles, values and patriotism of our League.”