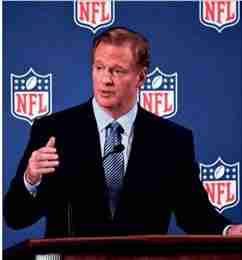 ORLANDO, Fla. – The NFL received a high grade for its racial hiring practices and a C+ for its gender hiring efforts in 2016, according to a diversity report released Wednesday.

The annual report by The Institute for Diversity and Ethics in Sport gave the league its seventh consecutive A on racial hiring practices and a combined grade of B for hiring minorities and women. The second straight C+ indicates the NFL still has a long way to go in improving hiring opportunities for women, but it is a dramatic improvement from two years ago, when the numbers were abysmal.

“The league itself is setting a kind of model for the teams that the teams haven’t fully followed and embraced, said Dr. Richard Lapchick, the report card author.

Lapchick, who is the director of TIDES, said the NFL received a C+ in gender hiring again largely because of its continued efforts to improve the hiring of women in decision- making roles following the Ray Rice domestic case.

The league took a lot of heat when Commissioner Roger Goodell initially suspended Rice for two games, then reversed direction and indefinitely suspended the former Baltimore Ravens running back after a video showed Rice delivering a punch that knocked out his fiancee in an Atlantic City elevator in 2014.

“I think the NFL has really paid attention to how much better they would be if they had more senior women to advise the league office and the commissioner,” Lapchick said.

The biggest gains for hiring women has come at the league level, where there are now 35 women at the vice president level, up from 31 last year and 21 in 2014. Cathy Lanier, the former police chief in Washington, D.C., was named the NFL’s senior vice president for security in August. “That was such an out- of-the-box hire,” Lapchick said. “That is a position that has historically been held by men in all of the leagues, so I think that was a real statement on the part of the (NFL).”

The number of people of color in the league office who serve at the vice president level or higher rose from 21 in 2015 to 24 this year. But at the team general manager level, it went from seven a year ago to five in 2016.

For the second year in a row, the NFL has six men of color who are head coaches. The Tampa Bay Buccaneers fired Lovie Smith in the offseason, but the Cleveland Browns hired Hue Jackson, keeping the number the same. The all-time high came in 2011, when eight out of the 32 coaches were men of color.

But there is some concern the numbers will not increase, as the percentage of assistant coaches of color dipped from 37.9 percent in 2015 to 31.9 percent in 2016. African-American coordinators dropped from 15 to 14 in a year. Coordinator-level jobs are normally where NFL teams look to find head coaches.

In the last four years, 21 of the 22 first-time head coaching hires have gone to white men. New York Jets coach Todd Bowles is the only first-time minority coach to be hired during that span, which some say is an indication that the Rooney Rule is no longer giving minority coaches the opportunities it was intended to when implemented.

While the league received an overall A for its racial hires, the lagging head coaching numbers along with the dip in the number of assistant coaches, coordinators and general managers is indication the NFL still has work to do.

In the coaching ranks, the Buffalo Bills became the first team to hire a woman as a full-time coach when they named Kathryn Smith the quality control coach for special teams this year. The Bills last year also had Kim Pegula, an Asian-American woman, join the ownership group.

Next post Senator Booker says focus should be on what Hillary Clinton says now, not 1996