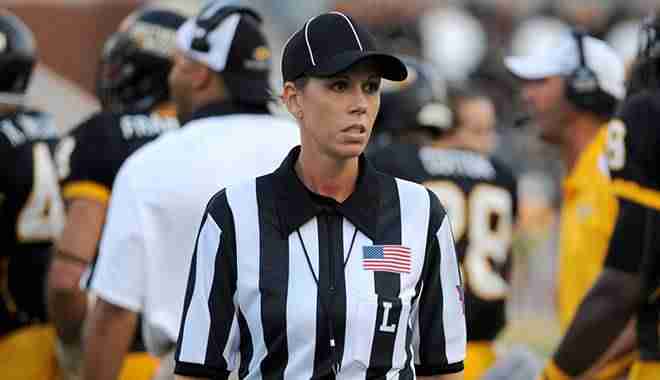 IRVING, Texas (AP) _ Sarah Thomas shared hugs and idle chatter at her first preseason clinic since the NFL made her the first full-time female on-field official.

All of her colleagues were doing the same thing Friday in what amounts to the unofficial end of their offseason. The pharmaceutical representative and mother of three was just another one of the guys, which is how she hopes coaches and players see her when the regular season starts in two months.

“I know it may be new for some, but I think being a part of the developmental program and going that way, maybe they’ll see me just as an official,” Thomas said. “That’s how I want them to see me.”

The 41-year-old Thomas won’t be the first woman to call a regular-season game. That was Shannon Eastin in 2012 when the NFL used replacement officials during a labor dispute. But she will be the first one getting a full season _ and a lot of attention along the way.

“I certainly wouldn’t want that attention,” said a chuckling Aaron Santi, one of nine other first-year officials likely to get that wish. “It’s going to be tougher for her. She’s going to be under the microscope a little more because the reality is this is a really difficult job and we all make mistakes. Hopefully the fans and the public and the media will allow her to make mistakes and not treat her with a different standard than anyone else.”

Thomas, who will be a line judge in 2015, is already the first female official in major college football, and the first to work a bowl game. She’s been in the NFL’s development program for two years, so she has done training camps and preseason games.

As for the novelty of being an NFL regular, long-time referee Ed Hochuli says that will wear off fast.

“It’ll be a big deal for the first few games,” Hochuli said. “Then it will go away. And then it’s a matter of are you right or wrong in your calls and you’re just another official out there and you get treated the same.”

Thomas, who grew up and still lives in Mississippi, recalled the story of her first game as an official, when she was asked to be the clock operator and told one of her mentors that she didn’t even know where the clock was. Thomas was a basketball player in high school and college and never worried about finding the clock.

“So he said, `Well, we can train monkeys to do the clock, and we’re just short of them tonight, so it’s your job,”’ Thomas said. “That’s how I got introduced.”

Thomas said not much has changed since the NFL hired her three months ago _ “working out and rules study, film review, talking to mentors that I have. Same thing.”

And she won’t be expecting players to treat her any differently.

“They just want the job to be done and be done consistently,” Thomas said. “Done right.”

Referee Walt Coleman, getting ready for his 27th season, has another view of Thomas as one of the guys: her career path.

“They work their way up,” he said. “They work junior high. They work high school. They work college football. And so when they get the opportunity to work in the NFL, they’re working with the best officials in the world.”

And that means she can expect the fans to hate her the same way they do every guy around her.

“I can tell you, when you get out there, with all those guys in those striped shirts, and everybody’s going to be after us,” said Coleman, whose son Walt Coleman IV is among the first-year officials. “And it’s going to be the same way for Walter and Sarah or whoever it is. Once that game starts, it’s going to be back to the same old football.”

And Thomas is ready.

For the grief. For the second-guessing. For the attention.

“The spotlight is what it is and being a first, I know that’s the reason this is,” she said. “I get it. It just comes with the territory. So no big deal.”

She’s used to it.

Next post Mississippi colleges get money for academic enrichment