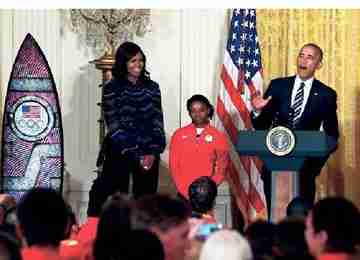 WASHINGTON – Relatives of Jesse Owens and America’s 17 other black athletes from the 1936 Olympics were welcomed to the White House on Thursday by President Barack Obama for the acknowledgement they didn’t receive along with their white counterparts 80 years ago.

Along with the relatives of the 1936 African-American Olympians, gloved-fist protesters Tommie Smith and John Carlos and members of the 2016 U.S. Olympic and Paralympic teams met the president and first lady Michelle Obama. Obama congratulated the Rio athletes, thanked Smith and Carlos for waking up Americans in 1968 and praised 1936 Olympians who made a statement in front of Adolf Hitler in Nazi Germany.

After running down a list of accomplishments of U.S. athletes in Rio, Obama singled out some people who “paved the way” for the current diverse Olympic team, including Owens, Smith and Carlos.

Owens winning four gold medals and being snubbed by Hitler is a piece of American history, but Obama made sure to note that the accomplishments at the 1936 Berlin Olympics weren’t just about him.

Sprinter Allyson Felix, who won gold in Rio in the 400 and 1,600-meter relays and silver in the 400 and has nine Olympic medals, said afterward she was glad to meet some of the relatives of 1936 Olympians and hear their stories.

“It’s been just so moving, so inspiring,” Felix said. “We’re just honored to be able to share this moment with them.”

They also shared it with Smith and Carlos, who made their own American history 48 years ago when they raised their gloved fists on the medals stand at the

Mexico City Olympics after the 200 in what they called “a human rights salute.”

“We’re proud of them,” Obama said. “Their powerful silent protest in the 1968 Games was controversial, but it woke folks up and created greater opportunity for those that followed.”

United States Olympic CEO Scott Blackmun said Wednesday night that the historic White House visits were meant in part to “pay tribute to all the progress that has come since.” That progress was on full display as part of the president’s remarks.

Obama pointed out that the diversity of the 2016 U.S. Olympic team was part of what made it successful. He singled out swimmers Michael Phelps and Katie Ledecky and others, but the first four medalists he mentioned were gymnast Simone Biles, shot putter Michelle Carter, swimmer Simone Manuel and boxer Claressa Shields, all of whom are black.

He also recognized Ibtihaj Muhammad, the fencer who became the first U.S. female athlete to compete in the Olympics in a hijab.

“Imagine what it means for a young girl or a young boy who sees somebody who looks like them doing something and being the best at what they do,” Obama said. “There’s no kid in American who can’t look at our Olympic team and see themselves somewhere.”

Owens said in interviews over the years that in 1936 President Franklin Roosevelt never sent him any words of congratulations or an invitation to the White House.

Marlene Owens Rankin and Beverly Owens Prather represented their father Thursday. Granddaughter Marlene Dortch said Tuesday night that her family members and others going to the White House to see Obama would have made her grandfather “so happy.”

Obama was happy that the final U.S. Olympic team he’ll host at the White House not only dominated the medal count but did so with so many different kinds of athletes.

“One of the wonderful things we love when we see our Olympians is everybody’s from all kinds of different backgrounds and shapes and sizes,” Obama said. “There’s something special about that.”