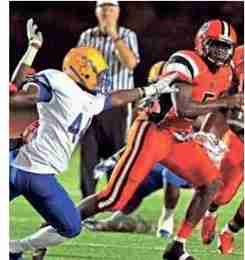 After six years of Miami Central Senior High dominating South Florida football, two high schools that battled it out year after year in the 1990’s have re- emerged as gridiron giants.

Both teams defeated the Central Rockets in the regular season to return to their former glory. The Northwestern Bulls have a record of 9-1 and the Carol City Chiefs have a record of 7-3, including regular and play- off games.

During the regular season game the Chiefs were upset by the Bulls’ last minute victory. The renewed rivalry is making a big splash in the South Florida community, with tons of pride coming from both sides.

Jorge McKenzie posted on Facebook, “Carol City gets a chance at redemption and will show them Bulls why they going to state!”

Northwestern’s defensive back coach is Torrie Cox, an alum who was a star player for Northwestern in 1998 when they completed a perfect season. He is also a former NFL player who spent his entire career with the Tampa Bay Buccaneers. He said the renewed success on the field is encouraging.

According to both sides, it will be a battle to the finish. Whoever prevails in Friday’s game will go on to the next round of the play-offs in their quest for a state championship.